Perilous Question: The Drama of the Great Reform Bill 1832

UK & Comm → Weidenfeld & Nicolson (Ed. Alan Samson)
Antonia Fraser's new book brilliantly evokes one year of pre-Victorian political and social history - the passing of the Great Reform Bill of 1832. For our inconclusive times, there is an attractive resonance with 1832, with its "rotten boroughs" of Old Sarum and the disappearing village of Dunwich, and its lines of most resistance to reform.

This book is character-driven - on the one hand, the reforming heroes are the Whig aristocrats Lord Grey, Lord Althorp and Lord John Russell, and the Irish orator Daniel O'Connell. They included members of the richest and most landed Cabinet in history, yet they were determined to bring liberty, which whittled away their own power, to the country. The all-too-conservative opposition comprised Lord Londonderry, the Duke of Wellington, the intransigent Duchess of Kent and the consort of the Tory King William IV, Queen Adelaide. Finally, there were "revolutionaries" and reformers, like William Cobbett, the author of "Rural Rides".

This is a book that features one eventful year, much of it violent. There were riots in Bristol, Manchester and Nottingham, and wider themes of Irish and "negro emancipation" underscore the narrative. The time-span of the book is from Wellington's intractable declaration in November 1830 that 'The beginning of reform is the beginning of revolution', to 7th June 1832, the date of the extremely reluctant royal assent by William IV to the Great Reform Bill, under the double threat of the creation of 60 new peers in the House of Lords and the threat of revolution throughout the country. These events led to a total change in the way Britain was governed, a two-year revolution that Antonia Fraser brings to vivid dramatic life.
Rights

Melissa Pimentel manages the translation rights for Perilous Question: The Drama of the Great Reform Bill 1832 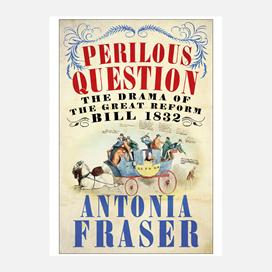