Twenty thousand years ago our planet was an icehouse. Temperatures were down six degrees; ice sheets kilometres thick buried much of Europe and North America and sea levels were 130m lower. The following 15 millennia saw an astonishing transformation as our planet metamorphosed into the temperate world upon which our civilisation has grown and thrived. One of the most dynamic periods in Earth history saw rocketing temperatures melt the great ice sheets like butter on a hot summer's day; feeding torrents of freshwater into ocean basins that rapidly filled to present levels. The removal of the enormous weight of ice at high latitudes caused the crust to bounce back triggering earthquakes in Europe and North America and provoking an unprecedented volcanic outburst in Iceland. A giant submarine landslide off the coast of Norway sent a tsunami crashing onto the Scottish coast while around the margins of the continents the massive load exerted on the crust by soaring sea levels encouraged a widespread seismic and volcanic rejoinder. 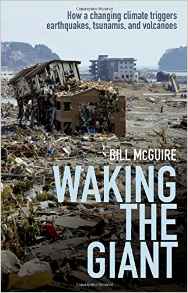