World → Weidenfeld & Nicolson
One of the landmark books of our time, The Hand-Reared Boy was the first British novel to explore, frankly and with unabashed honesty, the sexual awakening of a young boy as he grows from childhood to adolescence. With wit and perception it described preocupatioons that are common to all young males as they reach puberty, but which had never before been treated so explicity.

Rejected by thirteen publishers who were more accustomed to Brian W. Aldiss as an awad-winning writer of science fiction, the novel finally achieved publication through sheer newsworthiness. Reviewers recognised it for what it was - a delightfully funny and enjoyable account by the young Horatio Stubbs of his burgeoning sexuality, with genuine insights into the turbulent emotions of adolescence.

Today The Hand-Readed Boy no longer provokes the same sense of shock, but it remains a classic study of a boy's journey to self-discovery, culminating in his growing awareness that other people are more than sexual objects. Its refreshing candour, self mockery and absence of prurience mark it out as a book of lasting value.
Rights

Melissa Pimentel manages the translation rights for The Hand-Reared Boy 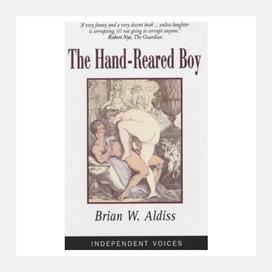