A decade on, history is threatening to repeat itself. The widow of one victim, herself now running for Governor, has received an anonymous threat - a newspaper clipping from that fateful day, along with the chilling words 'I'm back.'

Florida detective Cab Bolton agrees to investigate the threat against this candidate, Diane Fairmont: an attractive politician who has a complicated history with Cab's mother, Hollywood actress Tarla Bolton - and with Cab himself.

But by doing so, Cab is entering dangerous waters. Fairmont's political party is itself swamped in secrecy - a fact that, unknown to Cab, has led one of its junior staff to start asking very sensitive questions about the death of a party employee.

Both Cab and this young researcher, Peach Piper, are digging up the kind of dirt that ten years can't wash away. And as the powerful crosswinds of state politics swirl around Cab and Peach, and the threat of a tropical storm hangs over Florida, this whirlwind of pressure and chaos will ultimately unearth a poisonous conspiracy, and reawaken a killer who has lain dormant for a decade.
Rights

Kate Cooper manages the translation rights for Season of Fear

Italian
World
Edizioni Piemme
Spanish
World
Circulo De Lectores
Media
Reviews
SEASON OF FEAR has everything: unexpected plot twists that keep on coming, a smart and charming hero, and a setting that’s as sultry and dangerous as a tropical storm. It will blow you away. Linda Castillo
New York Times Bestselling Author

Brian Freeman's Season of Fear is so masterfully developed you can almost feel the intensity of the tropical storm as it overwhelms the locale and directly affects the characters' actions. This adds a significant element to the already suspenseful plot, providing an edge-of-the-seat, nail-biting reading experience with an exhilarating conclusion.

SEASON OF FEAR has it all....an ambitious, complex and eminently readable novel that will keep you reading all night long. 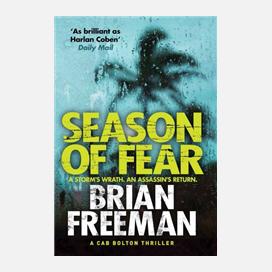