Sixteen-year-old Ezra McAdam has much to be thankful for: trained up as an apprentice by a well-regarded London surgeon, Ezra's knowledge of human anatomy and skill at the dissection table will secure him a trade for life. However, his world is turned on its head when a failed break-in at his master's house sets off a strange and disturbing series of events that involves grave robbing, body switching... and murder.

Meanwhile, sparky, persuasive young Loveday Finch, daughter of the late Mr Charles Finch, magician, has employed Ezra to investigate her father's death, and there are marked similarities between his corpse and the others. The mystery takes Ezra and Loveday from the Operating Theatre at St Bart's to the desolate wasteland of Coldbath Fields, from the streets of Clerkenwell to the dark, damp vaults of Newgate Prison, and finally to the shadowy and forbidding Ottoman Embassy, which seems to be the key to it all...

Sawbones has been described by Malorie Blackman, our current Children's Laureate, as, 'A superbly written page-turner.'

Sawbones has been longlisted for the 2015 CILIP Carnegie Medal. 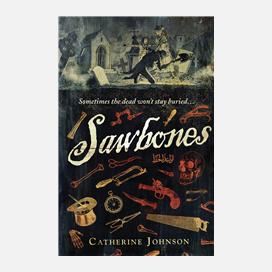