Producer Susie Liggat Writer Jodi Reynolds & Sally Dexter Starring
Production Company Shed Productions
Broadcaster BBC1
Sugartown tells the story of a struggling company that makes sticks of rock. Once successful, the business is in a slump following the fall in popularity of the town. Factory owner Jason Burr (played by Shaun Dooley) is fighting to stay afloat as the community's last main employer. There could be help though from his brother Max (played by Tom Ellis), who returns to the town with big plans for its re-development. However Max isn't interested in buckets and spades; he wants frappucinos, boutique hotels and hip bars.

This brings him into conflict with other members of the tight knit community who prefer the more traditional seaside town. Added to the mix is a new dance school run by unpredictable incomer Carmen (played by Georgia King), who also has ideas to revive the town's fortunes but while keeping its traditions.
Media 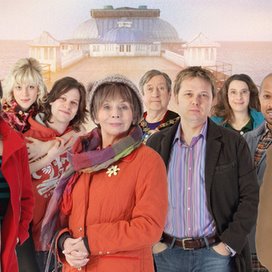