All The Hidden Truths

This is a fact: Ryan Summers walked into Three Rivers College and killed thirteen women, then himself.

But no one can say why.

The question is one that cries out to be answered - by Ryan's mother, Moira; by Ishbel, the mother of Abigail, the first victim; and by DI Helen Birch, put in charge of the case on her first day at her new job. But as the tabloids and the media swarm, as the families' secrets come out, as the world searches for someone to blame, the truth seems to vanish.

Katie McGowan manages the translation rights for All The Hidden Truths

Outstanding. A chilling, relentless and needle-sharp thriller that will stay with you long after you reach the final page.

This is such a clever, brave book. Askew looks unflinchingly at the unimaginable, but her writing is wrought with compassion. It’s as heart-rending as it is gripping.

It's top-class writing and I really hope that it won't be long before we hear more from Claire Askew. When we think about Edinburgh crime out thoughts turn to Ian Rankin and Val McDermid. Claire Askew could be up there with them.

A gripping, thought provoking and ultimately uplifting crime debut. I love that this book, which focuses on a crime against women, is itself about women and not the man that committed the crime. A story of how, when something terrible happens, you might start to pick up some of the tiny little pieces for your life and try to find a way through. The story, the characters and the city are all vivid and utterly alive and they left me feeling angry and full of adrenaline and love.

There's so much to enjoy about this compelling debut. The three different viewpoints really pulled me into the story, and got me thinking about the nature of victimhood as well as collective social responsibility. This is a timely, relevant, and thought-provoking novel.

Gripping, heartbreaking and horrifyingly plausible. I couldn't tear myself away from this book. Claire Askew is a stunning new voice in crime fiction.

A novel so shockingly current that it seem to fiction a world even as it changes around us.

This is such a clever, brave book. Askew looks unflinchingly at the unimaginable but her writing is wrought with compassion. It's as heart-rending as it is gripping.

Sabine Durrant, author of Lie With Me

All The Hidden Truths is a marvel... absorbing and suspenseful, it's a thought-provoking debut novel.

As scarily plausible as it is utterly captivating, this is an absorbing and unforgettable debut.

Raw, powerful, compassionate and deeply moving, with page-turning tension to the end. A stunning debut.

You'll be gripped by the unexpected truths that emerge. Compelling.

Gripping,
heartbreaking and horrifyingly plausible. I couldn't tear myself away from this
book. Claire Askew is a stunning new voice in crime fiction.

When we think about Edinburgh crime our thoughts turn to Ian Rankin and Val McDermid. Claire Askew could be up there with them.

Really excellent - totally gripping... very realistic. One to look out for.

Sophie Cameron, author of Out of the Blue 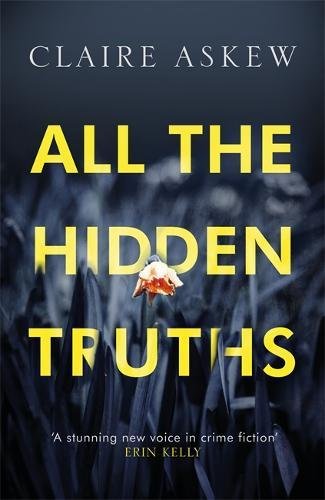