Adapted by Howard Overman, writer of Channel 4's hit comedy drama Misfits, anti-hero Dirk Gently operates his eponymous detective agency based on the fundamental interconnectedness of all things. Perpetually broke, hopelessly chaotic and utterly infuriating, most people suspect Dirk is nothing more than a cheap conman. And they might be right - but nevertheless his methods, though unusual, do often produce surprising results.

In this pilot, Dirk sets out to solve an apparently simple and harmless disappearance of a cat from an old lady's house, he unwittingly uncovers a double murder which, in turn, leads to a host of even more extraordinary events.

Media
Reviews
there wasn't very much you could fault about the production at all. Right down to the quirky camerawork and youthful, poppy soundtrack...the director, Damon Thomas, got it pretty spot-on. The result was a pleasingly festive-feeling adventure; part Wallace & Gromit, part Doctor Who, part The Secret Seven. Alice-Azania Jarvis
The Independent
A treat
Observer, Critic’s choice
Simple and predictable this ain’t. You’ll be scratching your head at the solution to this case for some time after the end, but there’s no uncertainty about the many moments of laughter that make this a happy hour.
**** Daily Mail
Dirk Gently has the same energy and freshness that marked out the acclaimed modern day version of Sherlock...
Manchester Evening News
A series please.
Guardian, Pick of the day 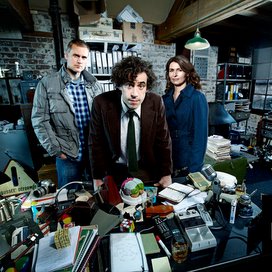