View PDF
tv
( In Production )
Creator Brian Fillis Producer Chris Clough Starring
Production Company Daybreak Pictures
Broadcaster Channel 4
Status In Production
Sirens, inspired by a book called Blood, Sweat and Tea written by Tom Reynolds, is a Channel 4 comedy drama set in Leeds. It explores love, friendship and family from the jaded perspective of a team of paramedics: the people who mop up the mess that we apes leave behind.

Created by Brian Fillis, Sirens follows the lives of three paramedics. To the outside world Stuart, Ashley and Rachid look like angels of mercy; to their colleagues, they're a trio of pedantic know-alls; and to the career alcoholics and late night revelers on the swarming streets of Leeds, they're nothing more than glorified taxi drivers with one drop-off point - Accident & Emergency.
Media 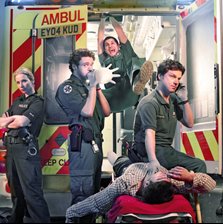