The First Men In The Moon

Producer Julie Clark Starring
Production Company Can Do Productions
Broadcaster BBC4
See the Full Version of this Work
It's July 1969 and, as the world waits with baited breath for news of the Apollo 11 astronauts, a young boy meets 90-year-old Julius Bedford (Rory Kinnear) who tells an extraordinary story of two men's journey to the Moon, way back in 1909.

As a young man, Bedford chances to meet Professor Cavor (Mark Gatiss), a somewhat unworldly scientist with an amazing invention: Cavorite – anything to which it is applied becomes opaque to the force of gravity. Knowing a miracle when he sees one, and with a keen eye on profit, Bedford encourages Cavor to think big. And so the two men construct a copper and cast-iron sphere which will fly them to the Moon.
Media 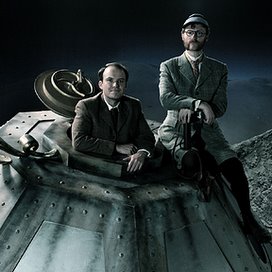