UK → Hodder and Stoughton
US → Vintage
'I can imagine you at forty,' she said, a hint of malice in her voice. 'I can picture it right now.' He smiled without opening his eyes. 'Go on then.'
15th July 1988. Emma and Dexter meet for the first time on the night of their graduation. Tomorrow they must go their separate ways. So where will they be on this one day next year? And the year after that? And every year that follows? Twenty years, two people, One Day.
One Day was a No.1 bestseller and winner of the Galaxy Book of the Year 2010.
The film adaptation starring Anne Hathaway and Jim Sturgess was released in the UK on the 24 August 2011.
Rights

Kate Cooper manages the translation rights for One Day

Big, absorbing, smart, fantastically readable. Nick Hornby
from his blog Full Review
[...] He has drawn on all his comic and literary gifts to produce a novel that is not only roaringly funny but also memorable, moving and [...] rather profound. The Guardian
Full Review
One Day is destined to be a modern classic. Daily Mirror
Full Review
A totally brilliant book about the heartbreaking gap between the way we were and the way we are... the best weird love story since The Time Traveller's Wife. Tony Parsons
Full Review
As a study of what we once were and what we can become, it's masterfully realised. Esquire

Deja Vu All Over Again
One Day is a masterful piece of storytelling, eminently readable and absorbing. This is because the intelligence and grace of Nicholls's writing infuses the novel with a degree of wit and pathos that makes it worth reading. Steven Hayward
The Globe and Mail Full Review
Last summer, at a beach house in the Hamptons, a weekend guest arrived carrying a novel she’d picked up abroad and was loath to put down. Called One Day, it was written by David Nicholls. Liesl Schillinger
The New York Times Sunday Book Review
Nicholls captures superbly the ennui of post graduation... The writing is almost faultless, there's a great feeling for the period and it's eminently readable. Herald

With a nod to When Harry Met Sally, this funny, emotionally engaging third novel from David Nicholls traces the unlikely relationship between Emma Morley and Dexter Mayhew. The Daily Mail
Full Review
Nicholls has a gimlet eye for period detail... A beguiling read. Observer

A wonderful, wonderful book: wise, funny, perceptive, compassionate and often unbearably sad. The Times
Full Review
Few books have captured our hearts and imaginations like One Day. Katie Mulloy
Stylist
Number one bestseller of 2011. The Guardian 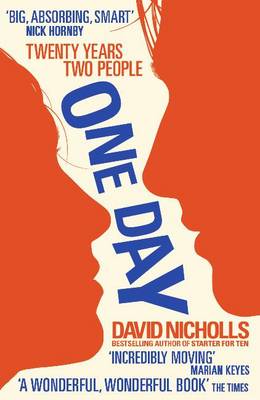