‘My mother died twice. I promised myself I would not let her story be forgotten . . .’

Leaving her twin sister behind, Pembe leaves Turkey for love – following her husband Adem to London. There the Topraks hope to make new lives for themselves and their children. Yet, no matter how far they travel, the traditions and beliefs the Topraks have left behind stay with them – carried in the blood.

Their eldest is the boy Iskender, who remembers Turkey and feels betrayal deeper than most. His sister is Esma, who is loyal and true despite the pain and heartache. And, lastly, Yunus, who was born in London, and is shy and different.

Trapped by the mistakes of the past, the Toprak children find their lives shattered and transformed by a brutal act of murder

A powerful novel set in Turkey and London in the 1970s and today, Honour explores pain and loss, loyalty and betrayal, the trials of the immigrant, the clash of tradition and modernity, as well as the love and heartbreak that too often tears families apart.
Rights

The book calls to mind The Color Purple in the fierceness of its engagement with male violence and its determination to see its characters to a better place. But Shafak is closer to Isabel Allende in spirit, confidence and charm. Her portrayal of Muslim cultures, both traditional and globalising, is as hopeful as it is politically sophisticated. This alone should gain her the world audience she has long deserved. Maureen Freely
The Guardian Full Review
Şafak delves into Turkish family, crosses borders in new book

Elif Shafak tells stories of great urgency, heart, and intellectual acuity. Honour is a powerful tale of family connection and heartbreak, offering us insight and delight in equal measure. This is a compulsively readable novel, an exquisite and deep rendering of the fullness of life. Aurelie Sheehan

[Honour] manages to be diverting and full of life while simultaneously analyzing the durability of violent cultural traditions. Holloway McCandless
shelfawareness.com Full Review

Shafak’s plot is marvelous and delicately layered. Shafak’s vivid, multigenerational sagas and explorations of gender discrimination have won her a loyal following among Turkish readers. With its rich emotions and tangled cultures Honour is sure to win over American readers too.

Shafak grips the reader from the opening page. Shafak's wonderfully expressive prose, sprinkled throughout with Turkish words and phrases, brings the characters to life in such a way that readers will feel they are living the roles.

Moving, subtle and ultimately hopeful, Honour is further proof that Shafak is the most exciting Turkish novelist to reach western readers in years.

Vivid storytelling that explores the darkest aspects of faith and love.

At every turn in this trenchant, dazzlingly imaginative, suspenseful, mystical, and socially astute novel, Shafak sheds light on the crushing consequences of oppressive gender roles, the struggles of immigrants, and the divide between brutal traditions and the quest for freedom and love.

Rich and wide as the Euphrates river along whose banks it begins and ends, Elif Shafak has woven with masterful care and compassion one immigrant family's heartbreaking story - a story nurtured in the terrible silences between men and women trying to grow within ancient ways, all the while growing past them. I loved this book.

Sarah Blake
Author of The Postmistress 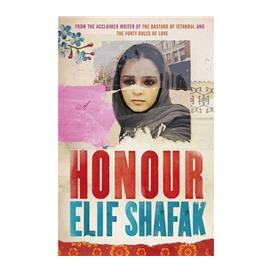