Carmen is happily married to Tom, a successful London lawyer and divorcee with three children from his previous marriage. She is content to absorb the stresses of being a stepmother to teenagers and the stain of ‘second wife’, but she knows she’ll always live in the shadow of another woman - not Tom’s first wife Laura, who is resolutely polite and determinedly home-counties but the lover that ended his first marriage: Zena. Zena who was shockingly beautiful. Zena who drowned swimming late one night.

Carmen can overlook her husband’s dead mistress… until she starts to suspect that he might have been the person who killed her.

With a growing sense of unease, Carmen sets about trying to piece together the events that occurred before she met Tom. As she uncovers documents and photographs, a very different tale to the one her husband has led her to believe begins to unfold, and she finds herself increasingly isolated and ever-more paranoid. And Zena, Zena seems ever-more present, even in death. Mercurial, mesmerising, deeply manipulative Zena – a woman, Carmen realises, who had the potential to incite the darkest of emotions in anybody.

With her husband a potential murderer, and her new family possible co-conspirators, Carmen must ask herself which is better: knowing the truth at the risk of having it destroy her, or living in blissful ignorance with a possible killer.

This exploration of the dark family secrets behind a second marriage kept me guessing right to the end.

... this is an immersing story, reminiscent of Daphne du Maurier's Rebecca, and the dead Zena exerts a powerful force. The “hidden currents” that keep us submerged in.

Absolutely gripping, I raced through Undertow - if you've got a journey to go on, an appointment to wait for, then pick it up and watch the time disappear.

A tense, gripping thriller that kept me turning the pages long into the night, desperate to know whom to trust.

... this chilling, twisty and hugely atmospheric tale is standing head and shoulders above the rest... This slow-burn tale sneaks up and grabs you by the throat, right when you least it expect it. Brilliant! 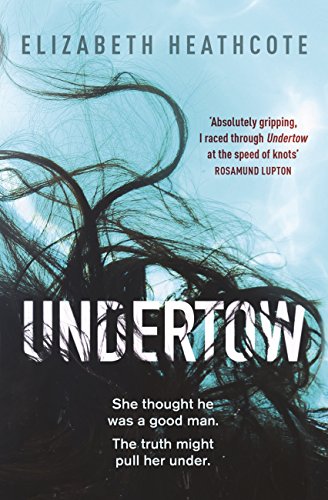