Producer Paines Plough Theatre Company Director Vicky Featherstone Starring
Menier Chocolate Factory
Two chairs, a table, a high window. An old woman, an old man. Prompted by their alarm clocks they tell their story. They tell of a village in which people's tongues are cut out, making them 'the Silent'. They tell of a ten-year-old boy lying in the woods, battered to death, his tongue cut out. They tell of children lined up outside the local pool - blue with cold in their swimming costumes - waiting to have their tongues cut out, then to be immersed in the pool. It's clearly a story they need to tell. . .
Media 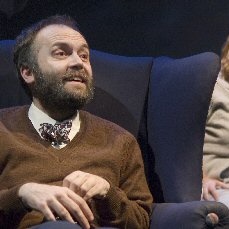