A remarkable play about what can happen when we become stuck in the stories we tell about our lives. Visceral and tender, The Walworth Farce combines hilarious moments with shocking realism.

It is very much a family affair in Landmark Production's revival of Enda Walsh darkly deranged play, as Brendan Gleeson is joined on stage by his two sons Domhnall and Brian. And the family should be proud, the dynamic between these three makes for powerful theatre.

Walsh’s tightly structured script packs in references to Synge, Beckett, Tom Murphy and Ionesco, as well as Hamlet, yet he forges his own brilliantly original dramatic vision

this feels like The Walworth Farce’s induction into the canon, an impossible and inescapable performance of identity and fantasy, the real story, perhaps, of who we are

eye-wateringly funny... The two hours - plus interval - fly by.

Walsh's surreal yet thoroughly engrossing portrayal of a family that has long lost all sense of reality... This one will stay with you for days. 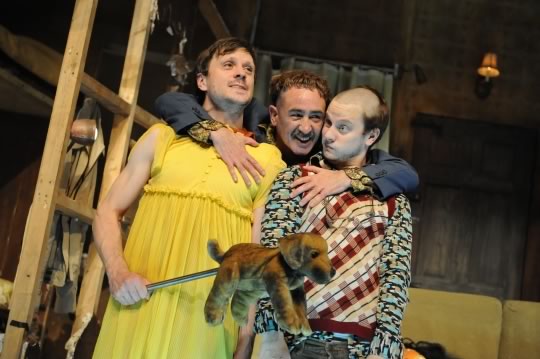