Our Kind of Traitor

Two young lovers treat themselves to a once-in-a-lifetime holiday on the Caribbean island of Antigua. He’s an austere tutor at Oxford. She’s a sparky rising London barrister. Their native Britain is floundering in debt.

On the second day of their holiday they encounter a rich, charismatic fifty-something Russian millionaire called Dima who owns a peninsula, wears a diamond-encrusted Rolex watch, has a tattoo on the knuckle of his right thumb and wants a game of tennis.

What else Dima wants is the engine that drives John le Carré’s majestic, thrilling, tragic, funny and utterly engrossing new novel of greed and corruption, from the arctic hells of the gulag archipelago to a billionaire’s yacht anchored off the Adriatic coast; to the Men’s Final of the French Open tennis championships at the Roland Garros stadium; to two murky Swiss bankers dubbed Peter and the Wolf; and finally and fatally to a Swiss alpine resort nestling in the shadow of the north face of the Eiger and the story’s terrifying end.
Rights

Kate Cooper manages the translation rights for Our Kind of Traitor

Tim Morrison
Time
Few recent plays have had dialogue as good, and few recent literary novels can boast a set of characters so vividly imagined. Our Kind of Traitor is a teasing, beguiling, masterly performance. John Dugdale
The Sunday Times
Compellingly effective and extremely alarming.
The Irish Times
A compelling tale of deceit, dialogue and the author’s own despair. James Naughtie
The Telegraph
A literary master for a generation.
Observer
The new le Carre is always an event, and this...coincides with the publication of his first major success, The Spy Who Came in from the Cold, as a modern classic – a tribute he richly deserves.

As always with this master of intrigue and ennui, it is betrayal that lies at the heart of the story.

Written with typical precision and a miniaturist’s skill..it is tremendous.., with its mixture of confused loyalties, almost playfurl pathos, doomed good intentions – and a fabulous twist.
The Daily Mail
If you want to know about the state of Britain today, forget the Booker Prize shortlist. Just read John le Carré's latest thriller, Our Kind of Traitor
The Evening Standard
This chilling and astute post-Cold War thriller proves that John le Carré is still on top form In Our Kind of Traitor, there is not a hair out of place. Having plumbed the devious depths of the Cold War, le Carré has done it again for our nasty new age.

It is depth of character, more than convolutions of plot or pace of action, that sucks you into the creepily familiar world of le Carré’s creations: dodgy, charming, all-too-human oddballs with a twinkle in the eye, a ready smile and a dagger in the hand that slaps you on the back.

‘Le Carré writes in that curious tense he has made his own, which those few who can’t stand him abhor but true disciples adore Peter Millar
The Times
Our Kind of Traitor builds to a masterful climax
The Scotsman
If you want to know about the state of Britain today, forget the Booker Prize shortlist. Just read John le Carré's latest thriller.
Evening Standard
...a complex but fascinating subject, and le Carré dissects it brilliantly. Bill Ott
Booklist Full Review 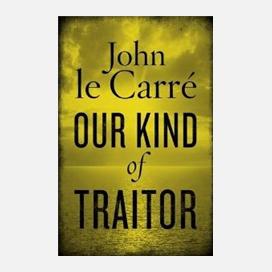