The Existential Threat of Big Tech

Franklin Foer reveals the existential threat posed by big tech, and in his brilliant polemic gives us the toolkit to fight their pervasive influence.

Over the past few decades there has been a revolution in terms of who controls knowledge and information. This rapid change has imperilled the way we think. Without pausing to consider the cost, the world has rushed to embrace the products and services of four titanic corporations. We shop with Amazon; socialise on Facebook; turn to Apple for entertainment; and rely on Google for information. These firms sell their efficiency and purport to make the world a better place, but what they have done instead is to enable an intoxicating level of daily convenience. As these companies have expanded, marketing themselves as champions of individuality and pluralism, their algorithms have pressed us into conformity and laid waste to privacy. They have produced an unstable and narrow culture of misinformation, and put us on a path to a world without private contemplation, autonomous thought, or solitary introspection – a world without mind. In order to restore our inner lives, we must avoid being co-opted by these gigantic companies, and understand the ideas that underpin their success.

Elegantly tracing the intellectual history of computer science – from the Descartes and the enlightenment to Alan Turing to Stuart Brand and the hippie origins of today's Silicon Valley – Foer exposes the dark underpinnings of our most idealistic dreams for technology. The corporate ambitions of Google, Facebook, Apple, and Amazon, he argues, are trampling longstanding liberal values, especially intellectual property and privacy. This is a nascent stage in the total automation and homogenization of social, political, and intellectual life. By reclaiming our private authority over how we intellectually engage with the world, we have the power to stem the tide.

At stake is nothing less than who we are, and what we will become. There have been monopolists in the past but today’s corporate giants have far more nefarious aims. They’re monopolists who want access to every facet of our identities and influence over every corner of our decision-making. Until now few have grasped the sheer scale of the threat. Foer explains not just the looming existential crisis but the imperative of resistance.

Helen Manders manages the translation rights for World Without Mind

World without Mind is an argument in the spirit of those brave democracy protestors who stand alone before tanks. Franklin Foer asks us to unplug and think. He asks us to recognize and challenge Silicon Valley’s monopoly power. His book is a vital response to digital utopianism at a time when we desperately need new ethics for social media

In World Without Mind [Foer's] critique of Amazon has blossomed into an elegant polemic against the giant companies whose ability to please consumers has for too long masked corollary dangers for the economy, for personal privacy and, ultimately, for the exercise of democracy.

World Without Mind thus joins a lengthening list of blistering critiques of our networked world … In its take-no-prisoners attitude to the digital giants, it echoes these protests against the hijacking of our culture by youthful moguls imbued with the invincible arrogance that often accompanies great – and suddenly acquired – wealth. What sets it apart is the style and verve of the writing…full of sharp insights, elegantly expressed.

[An] elegant polemic against the power and ambition of the big tech companies... Foer argues passionately that we are sleepwalking into a world where "we’re constantly watched and constantly distracted."

World Without Mind is a searing take, a polemic packed with urgency and desperation that, for all its erudition and eloquence, is not afraid to roll up its sleeves and make things personal.

Lucid and ambitious new book... Foer is smart and trenchant when he attacks.

Foer’s denunciation of online journalism, which comes in his book’s best chapter, is powerful… His book comes as a rousing recommendation of a subscription model newspaper that avoids the ravages of virality.

The book flits between history, philosophy and politics and politics, but it is also a first-hand tale… His recounting of this clash between old and new media is authentic and absorbing.

Essential reading - while we still know what reading is ...  This book leaves us in no doubt: no greater threat to our humanity exists.

A fascinating, far-reaching discussion of the monopolistic behavior and intentions of Amazon, Facebook, and Google . . . Foer excavates the history of journalism, publishing, and even the coverage of America's fascination with food in this well-structured, accessible, and entertaining book  . . . This is a splash of ice cold water, a fierce call to action, and a great read.

Foer constructs a scathing critique of tech culture and breaks down the collective history and impact of giant corporations . . . this is more a call to arms than a wake-up call. It's a rousing . . . spin on the Silicon Valley origin story and the cultural impact of technology. 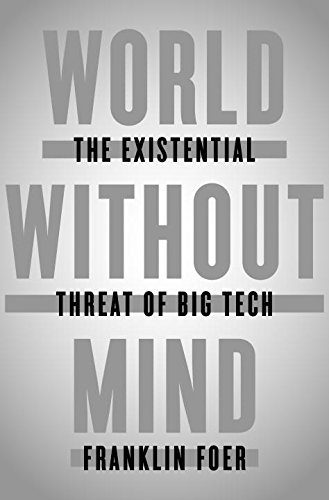