UK & Comm → Hodder (Ed. Nick Sayers)
This is the moment that MI6 has been working for: an Iranian caught in a Dubai ‘honey trap’ and flown to a safe house for interrogation. He may only be a Corporal in the Revolutionary Guard, but as chauffeur to a top general, he knows the location of secret nuclear and military sites and often overhears unguarded conversations in the car. It’s a coup to put the Brits one up on the Americans and Israelis.

But the Corporal won’t talk unless they bring his wife out of Iran too.

So the SAS are asked to find the woman and smuggle her out of Tehran – but they turn it down as an impossible risk.
Which is how three former soldiers hired from a London agency and Zach Bennett, a university drop-out recruited for his Persian language skills, find themselves about to cross the world’s most dangerous frontier on a mission that will mean certain death if they are caught.

And the Corporal’s wife is not the kind of person they expected to find. In fact, the fiery, independent, beautiful Farideh is not like anyone Zach Bennett has ever met in his life.

This is an epic, nail-biting story of courage and betrayal, a brilliant glimpse into a closed society and the way the secret services operate on both sides of the line between politics and morality.
Rights

Melissa Pimentel manages the translation rights for The Corporal's Wife 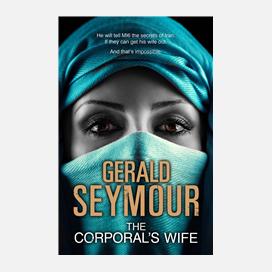