World → Overlook Press
Hidden in the empty vastness of the world's greatest desert - the Empty Quarter of Saudi Arabia - a tiny caravan of fugitives and camels moves painfully slowly towards its goal. In extreme heat and exposed to cruelly vicious storms, it is a place where only the strongest and most determined men will survive.

Deep in the sands, lost from sight, are the leadership of Al Qaeda, hunted, pursued and regrouping to strike again. Among the bedouin and Arabs of the caravan one man stands out. His strength, self-imposed discipline and leadership mark him. He is an Outsider. To look into his face and memorise it is to court death. His identify is masked, his past is blanked from his memory. To him, the leadership is his only family, and his loyalty to the family is total. Searching for him in the limitless sands and dunes are American and British experts in counter-terrorism with a full range of sophisticated electronics at hand. Above him, quartering the desert, is the unmanned Predator aircraft that is invisible in the cloudless skies and that carries the Hellfire missiles. But he is no easy prey.

If they fail to find and kill him, if he reaches his family and receives his orders, the Outsider will disappear again, before re-emerging in a teeming western city with a suitcase that will create havoc and murder when it is detonated.
Rights

Katie McGowan manages the translation rights for The Unknown Soldier 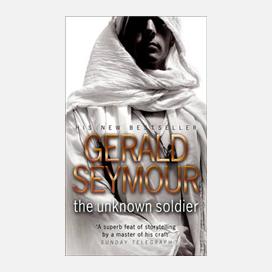