A brilliantly written portrait of Lucifer encountering the world of the senses, telling his version of the Bible, and discovering what it's like to be human - in Clerkenwell.

'Now, Your million questions. All, in the end, resolvable into one: What's it like being me? What, for heaven's sake, is it like being me? In a nutshell (which, thanks to me, is the way you like it in these hurrying and fragmented times), it's hard.'

Finally, the other side of the story. The Prince of Darkness has been given one last chance: he will be readmitted to the company of his fellow angels if he agrees to live out a human life. Highly sceptical (naturally), the Old Deal-maker negotiates a trial period - a summer holiday in a human body, with all the delights of the flesh.

The body, though, turns out to be that of Declan Gunn, a depressed writer living in Clerkenwell, interrupted mid-suicide. Making the best of a bad situation, Luce himself takes to writing - to explain, to strip back the Biblical spin, to help us see the whole thing from his point of view. And to knock that Jesus off his perch.

Beset by distractions, miscalculations and all the natural shocks that flesh is heir to, Lucifer slowly begins to learn what it's like to be us. Glen Duncan's brilliantly written new novel is an investigation of the world of the senses - the seductiveness of evil, and the affection which keeps us human.

Kate Cooper manages the translation rights for I, Lucifer 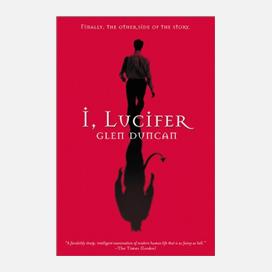