It's the most sensational case of the decade. Fifteen-year-old Jessica Silver, heiress to a billion-dollar real estate fortune, vanishes on her way home from school. Her teacher Bobby Nock, a twenty-five-year-old African American man, is the prime suspect after illicit text messages are discovered between them - and Jessica's blood is found in his car. The subsequent trial taps straight into America's most pressing preoccupations: race, class, sex, law enforcement, and the lurid sins of the rich and famous. It's an open and shut case for the prosecution, and a quick conviction seems all but guaranteed. Until Maya Seale, a young woman on the jury, convinced of Nock's innocence, persuades the rest of the jurors to return the verdict of not guilty, a controversial decision that will change all of their lives forever.

Flash forward ten years. A true-crime docuseries reassembles the jurors, with particular focus on Maya, now a defense attorney herself. When one of the jurors is found dead in Maya's hotel room, all evidence points to her as the killer. Now, she must prove her own innocence - by getting to the bottom of a case that is far from closed.

As the present-day murder investigation weaves together the story of what really happened during their deliberation, told by each of the jurors in turn, the secrets they have all been keeping threaten to come out - with drastic consequences for all involved.

Jake Smith-Bosanquet manages the translation rights for The Holdout

The story is gripping, and the pace is furious, but the author also manages to take the scenic route with some nice writing

Exhilarating ... a fiendishly slippery game of cat-and-mouse justice (and injustice) in the twenty-first century.

Graham Moore's heart beats on every page of The Holdout, a murder trial as only he could have written it: secrets and lies, mysteries upon mysteries, and a cast of characters each with their own dubious motives. This is a tense, emotionally charged, scary-good, standout read that hooked me till the last page.

This stellar novel from bestseller Moore takes a searing look at the U.S. justice system, media scrutiny, and racism ... Moore has set a new standard for legal thrillers.

Wow! I loved The Holdout, in which author Graham Moore does the impossible, creating a page-turning legal thriller with a twisty and absolutely riveting plot, as well as raising profound and thought-provoking questions about the jury system and modern justice.

Clever, well-written, and twistier than a can of Silly String. You absolutely need to read The Holdout. I could not put it down.

Quite the tour de force! Twelve Angry Men meets Chinatown and creates something of its own.

Stayed up late to finish The Holdout. Still in shock this morning ... I didn't see that ending coming! Amazing thriller, deserves to be one of the biggest books of 2020.

A smart, deeply satisfying legal thriller, The Holdout is the book to read if you’ve been missing “American Crime Story,” especially the first season covering the O.J. Simpson trial.

Moore's background as a screenwriter might explain his accomplished plotting; but he excels, too, at in-depth characterisation.

The Sunday Times 'Thriller of the Month'

Gripping and unsettling… a bracingly uncompromising book. It will doubtless be devoured with an ache of recognition by large numbers of women. But it really ought to be read by men

Moore's smartly constructed book examines the voracious nature of tabloid journalism, the elasticity of fact and the way the letter of the law conflicts with mercy, and its effective surprises continue even into its final chapter. 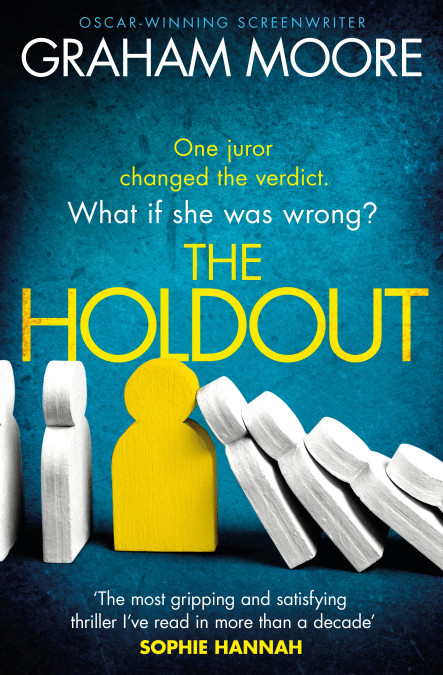