Greetings! My name is Skeleton Keys and these fantabulant fingers of mine can open doors to hidden worlds… Join me for the curious tale of Gap-tooth Jack – thief, adventurer and champion of imagining!

When Skeleton Keys banishes Wordy Gerdy from the present using his Key to Time, he thinks he’s seen the last of the troublesome unimaginary. But Gerdy uses her ghostly pen to wreak her revenge, and before Skeleton Keys knows it she’s written his precious keys out of existence.

Skeleton Keys and his partner Daisy must follow Gerdy into the past to retrieve her pen and make her restore his keys. But Skeleton Keys has unknowingly sent Gerdy back to his own past and her pen is now in the hands of notorious thief Gap-tooth Jack. As they set off to find Jack, Skeleton Keys can’t help noticing that everything looks strangely familiar. Then he comes face to face with the thief – could it be that the two have met before? 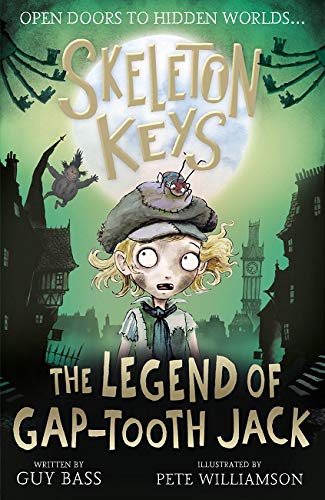