Gyles Brandreth’s revealing journal paints an extraordinary portrait of Whitehall and Westminster in our time – warts and all.

Brandreth – MP for Chester and Government Whip – enjoyed a ringside side at the great political events of the 1990s, from the fall of Margaret Thatcher to the election of Tony Blair. With candid descriptions of the key figures of the era, from the leading players to the ministers who fell from grace, and a cast that includes the Queen, Bill Clinton and Joanna Lumley, these witty and widely acclaimed diaries provide a fascinating insight into both the reality of modern government and the bizarre life of a parliamentary candidate and new MP.

Controversially, Breaking the Code also contains the first ever insider’s account of the hitherto secret world that is the Government Whips’ Office.

This new, complete edition features material previously excised for legal reasons, as well as additional diaries that take the story on another ten years to the departure of Tony Blair and the arrival as Tory leader of David Cameron – a bright young ‘hopeful’ when Brandreth first meets him in 1993. 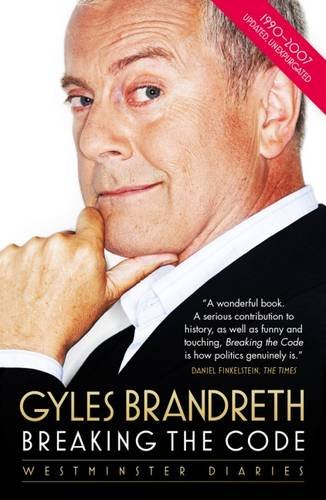