The Lost Art of Having Fun

Welcome to the ultimate rainy-day book: three generations of the Brandreth family teach you every game you'll ever need to banish boredom from Wink Murder to Sardines and from Consequences to 'Squeak, Piggy Squeak'

One good thing about a recession is that we need to go back to making our own fun. Games are in the Brandreths' blood, they have spent thousands of weekends and rainy holidays playing them and now Gyles, Saethryd and seven-year-old Rory want to share the very best with you. THE LOST ART OF HAVING FUN picks out over 250 games, guaranteed to make even the grumpiest child or adult laugh, and then with all kinds of interesting stories and lovely illustrations, it shows you clearly (and very entertainingly) how to play them. There are classic parlour games alongside all kinds of interesting ones you might not have come across yet.

Nine chapters cover pretty much every eventuality: Rainy Day Games, Car Journey, Analogue Fun in a Digital World, Music and Drama, Word Games and Brainteasers, Racing Games, Party Games (split between children's birthday parties and dinner parties), Country House Weekend and last but not least Seasonal Games: Christmas, New Year and Easter. Forget consoles and board games, this beautiful book is all you need. And Queen Victoria (whose favourite games are here too) would be amused. Very amused.

Gyles Brandreth is the UK expert on all indoor games. In fact, he says modestly, he knows more about games than anyone else on the planet. He was conceived as a result of his father buying the first game of Monopoly sold in Britain, he later became European Monopoly champion, he founded the National Scrabble Championship, he has been on the word and numbers TV game COUNTDOWN since it started thirty years ago, and he features regularly on radio panel games like JUST A MINUTE and WORDAHOLICS . Gyles has written nearly 100 books covering card games, mazes, word puzzles, family games and children's games. His great-great-grandfather published a book of games in 1865 and games have played a big part in the Brandreth family life ever since, as his daughter Saethryd and grandson Rory can attest. 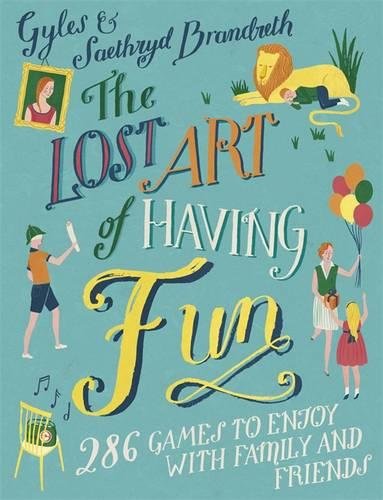