The Line of Fire

After Pearl Harbor, the Japanese swept into the South Pacific to capture the beautiful and strategic port of Rabaul, in the Australian Mandated Territory of New Guinea. Rabaul was to become the focus of one of the bloodiest wars and longest battles in history. Germany wanted it; the US wanted it; the British hadn’t wanted Australia to get it in the first place; and Australia desperately needed it.

The true, previously untold, story of an 11-year-old Australian boy Richard Manson and his mother, Marjorie, is a story of gold and volcanoes, poverty and ambition, secrets and betrayal. It’s the story of a tropical paradise destroyed by the geology that made it beautiful and strategically desirable. It’s the story of the tectonic forces that made Rabaul a battlefield in two world wars, and a story of the small steps that can lead to disaster.

But ultimately it’s the gripping and tragic story of a seemingly ordinary family on the wrong side of history – the young boy would be taken by Japanese secret police to the base of a volcano in New Guinea and shot as a spy. So ended a young life and a remarkable journey for what seemed to be an average working-class family caught up in one of the biggest battles of the Pacific War.

Kate Cooper manages the translation rights for The Line of Fire 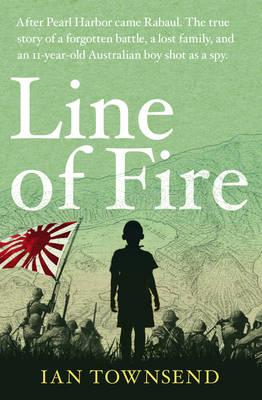