The Battle of the Sexes

The Battle of the Sexes covers the infamous 1973 tennis match between Billie Jean King and Bobby Riggs. When Bobby Riggs announced that he could beat any female tennis player, and that women did not belong on the tennis court, Billie Jean King took up his challenge.

The historic match is still the most watched tennis match in history with footage included in the documentary. The Battle of the Sexes also contains contributions from the female stars of the 1970s and current tennis players.

Media
Reviews
a smart, gripping and enormously enjoyable parable Tom Huddleston
Time Out
entertaining documentary gives a context to and an account of the media circus that surrounded what remains the most watched game of tennis in history Wendy Ide
The Times Full Review
A fascinating excavation of a crossover sports/pop culture moment from the early 70s Andrew Pulver
The Guardian
The hoopla surrounding the match is splendidly caught. Anthony Quinn
The Independent
engrossing doc about the efforts of a few, pioneering female tennis players to bring sexual equality to the sport Miles Fielder
The List
a terrific documentary...it chronicles a famous tennis match but it's much more than a film about sport Mark Kermode
BBC
Battle of the Sexes is one of the most entertaining documentaries that I have had the privilege of watching this year. It is a real treat that is not to be missed. Helen Earnshaw
Female First 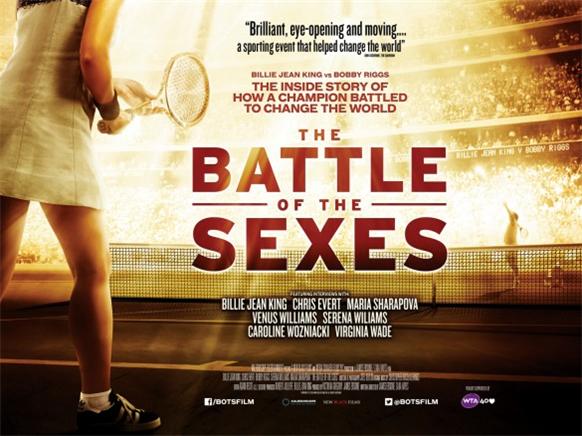