Hand-Me-Downs was written as part of 66 Books, the Bush Theatre's epic project that opened its new theatre in October 2011.

66 writers were given the task of creating a piece of work in response to one of the books of the Bible. James' play was written in response to 2 Timothy.

The run began and ended with two epic performances that lasted for 24 hours and saw every play shown in sequence. 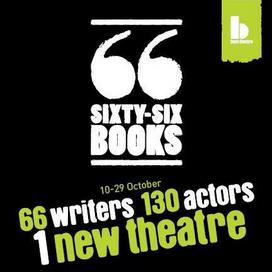