Barney and Nicola are advertising wonder kids. They win accounts with wit, charm and a secret weapon: Barney's ability to feel, smell and taste colours, and to translate these sensations into words. Lately Barney has been finding things far too colourful and wishes his full throttle London life was more black and white, but Nicola is hell bent on winning accounts at all costs. When the two hire an old Scottish Whisky Taster to help them with a new campaign, the enigmatic and mysterious figure slows the Londoners to a stop with his strange wisdom, just as the deadline looms.
Media
Reviews

It is charming, funny, sad and original and has much to say about the times in which we live...

Charles Spencer
The Telegraph
a brilliantly pacey and culturally penetrating new comedy... Paul Taylor
The Independent
Thought-provoking, observant and emotionally intelligent, this is a superb piece of new writing Aleks Sierz
The Stage 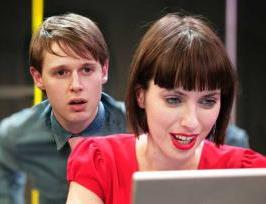