The aftermath of a tight election, the UK in economic peril, it's 1974 and the House of Commons is a battle ground.

Fist fights, political arguments and close votes, MP's are wheeled through the divisions on their deathbeds.

In times of strife the whips are king and their work is never done.

This House opened on 9th October 2012 at the Cottesloe Theatre to critical acclaim and ran until 1st December 2012. This House transferred to the Olivier Theatre in February 2013.

diligently researched, ferociously witty, and permeated by a deep sense of the tragic-comic nature of all political systems... astonishingly assured

Dominic Maxwell
The Times Full Review
James Graham’s superb new drama held me and I suspect everyone else in the audience enthralled throughout... I have little doubt that This House will be a strong contender for the best new play of 2012 Charles Spencer
The Telegraph

Graham shapes a brilliantly exhausting, funny and moving political epic... another hit is born in the Cottesloe. It will last longer than the years it depicts

Libby Purves
The Times Full Review
Graham approaches the chaos of party politics in a style that is often bitingly funny... displaying a humane and savvy wit that is very much Graham’s own Henry Hitchings
Evening Standard
recreates, with startling vividness, the madness of life in the Westminster village during five action-filled years... I had a thoroughly good time Michael Billington
The Guardian

**** The script nails the satin and bellicose tones of politicians, and a culture stiff with sexism and class-consciousness

Maxie Szalwinska
The Sunday Times Full Review
astute, funny and hugely enjoyable new play Sarah Hemming
Financial Times Full Review
This House, with its humour, its tension, its ability to subtly explain the complexities of the situation, is a masterclass in how to write political drama. Jeremy Austin
The Stage 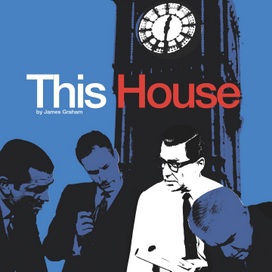