Commissioned by the National Youth Theatre and boasting a large ensemble cast, Tory Boyz was a much discussed, energetic and acerbic political comedy that speculated about homosexuality in Britain's Conservative Party, both today and in the past.

Opening in August 2008, the play sold out its six week run at the Soho Theatre. Tory Boyz was revived in the West End by the National Youth Theatre in 2013 for a limited run.

James updated the play for a revival at The Ambassadors Theatre running from 24th September 2013 to 27th November 2013. The play now reflects upon the recent dramatic changes in the British political landscape - the formation of a Coalition government and Tory approval of gay marriage.

Media
Reviews
this intriguing, contentious new play Michael Billington
The Guardian
the script itself... emerges as the triumphant element of this evening... brilliantly enjoyable, extremely poignant and remarkably relevant. Daisy Bowie-Sel
Time Out
a deft and beautifully wrought piece of writing... very funny, often brutal Michael Coveney
WhatsOnStage
Graham goes at it with fizz, flair and no small degree of humour Fiona Mountford
Evening Standard
Entertaining and thoughtful... Playwright James Graham is fast becoming our most acute dissector of the political classes Lyn Gardner
The Guardian
makes for very funny and uncomfortably authentic viewing for those who have spent time working in SW1 Tara Hamilton-Miller
New Statesman
TORY BOYZ &ndash; Ambassadors&rsquo; Theatre, WC1<br /> <br /> A LATE BUT BRACING BOUQUET FOR THE NYT<br />
it was a smart move to revive (with the author’s skilful updates) James Graham’s 2008 play about the Conservative Party and gay rights. Libby Purves
theatreCat Full Review 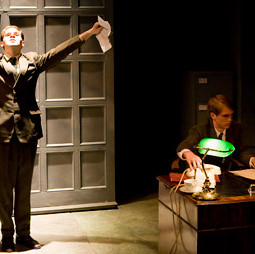