A Visit from the Goon Squad

Longlisted for the Orange Prize.

Finalist for the PEN/Faulkner Award.

Bennie and Sasha never discover each other’s pasts, but the reader does, in intimate detail, along with the secret lives of a host of other people whose paths intersect with theirs in the San Francisco 1970s music scene, the demimonde of Naples, New York at many points along the way from the pre-Internet nineties to a postwar future, and on a catastrophic safari into the heart of Africa.

We meet Lou, Bennie’s charismatic, careless mentor; Scotty, the young musician who slipped off the grid; the uncle facing a failed marriage who goes in search of seventeen-year-old Sasha when she disappears into Italy; and the therapist on whose couch she dissects darker compulsions.

A Visit from the Goon Squad is a book about time, survival, and the electrifying sparks ignited at the seams of our lives by colliding destinies. Sly, surprising, exhilarating work from one of our boldest writers.

A Visit from the Goon Squad is to be adapted into a TV series by HBO.
Rights

Bulgarian
World
Millenium Publishing House
Catalan
World
Edicions de 1984
Chinese Complex
Taiwan
China Times Publishing Company
Chinese Simple
Mainland China
China South Booky Culture Media Co. Ltd
Croatian
World
Profil International
Czech
World
Euromedia Group
Danish
World
Forlaget Klim
Dutch
World
Uitgeverij De Arbeiderspers
Finnish
World
Tammi
French
World
Editions Robert Laffont
Georgian
World
Parnassus Books
German
World
Schoffling & Co
Hebrew
World
Am Oved Publishers
Hungarian
World
Libri Könyvkiadó
Icelandic
World
Bjartur
Italian
World
Arnoldo Mondadori Editore
Japanese
World
Hayakawa Publishing Inc
Korean
World
Moonhakdongne
Lithuanian
World
Metodika
Macedonian
World
TRI Publishing Centre
Norwegian
World
Oktober
Polish
World
Rebis
Portuguese
Portugal
Quetzal Editores
Portuguese
Brazil
Editora Intrinseca
Romanian
World
Pandora / TREI
Russian
World
Corpus Publishers
Serbian
World
Kontrast Publishing House
Slovene
World
Modrijan zalozba
Spanish
World
Salamandra
Swedish
World
Norstedts
Turkish
World
Pegasus Yayincilik
Ukrainian
World
Ecem Media
Vietnamese
World
Tre Publishing House
Media
Reviews
The writing is compelling, some of the most oddly haunting fiction I've read this year.
Andrew Neather
Best Books of the Year, Evening Standard
Something quite remarkable. Keith Miller
Books of the Year 2011, The Telegraph
Inventive and hugely entertaining. David Nicholls
The Guardia: Books of the year 2011
Jennifer Egan's A Visit from the Goon Squad revived memories of the days, decades ago, when American fiction seemed so much more vital and innovative than our own. It is unusual in structure, presenting a number of stories, most of them about people in the music business, which seem to be freestanding but prove to have surprising connections with each other, and the style effortlessly hits its targets again and again. David Lodge
The Guardia: Books of the year 2011
This dazzlingly clever novel set in the American music world is a must read: irresistible as fiction of the highest quality.
The Sunday Times
If you're going to read one new novel this summer, it should be this...Constantly funny, moving, surprising - always fast and accurate. As soon as you've finished it, you want to read it again, understanding more.
Evening Standard
...a hilarious melancholy, enrapturing, unnerving, and piercingly beautiful mosaic of a novel... Donna Seaman
Booklist, Starred Review
[T]his powerful novel chronicles how and why we change, even as the song stays the same. Starred Review
Publisher's Weekly
Another ambitious change of pace from talented and visionary Egan, who reinvents the novel for the 21st century while affirming its historic values.
Starred Review
Kirkus Review
...an exhilarating, big-hearted, three-headed beast of a story...We see ourselves in all of Egan’s characters because their stories of heartbreak and redemption seem so real they could be our own. Need to Read
Marie Claire
A novel that’s a globe-trotting, decade-leaping romp about music-industry people with fashionable foibles.
Lisa Shea
Elle Magazine
Don’t be put off if what you know about rock begins and ends with the Rolling Stones. Jennifer Egan’s novel is irresistible on its own terms as fiction of the highest quality.
Sunday Times
A Visit from the Goon Squad is a work of imaginative energy and charm, and it deserves to win Egan many converts this side of the Atlantic.
The Telegraph
Centered on denizens of the music industry, Egan's tale spans decades, shifts styles and engrosses from start to finish.
People Full Review
New York City saga.
The Evening Standard
Readers with a passion for experimental fiction and innovative prose will surely revel in the time-hopping, nonlinear narrative of Jennifer Egan's A Visit From the Goon Squad. Jeannie Tucker
Library Journal Full Review
An inventive novel...experimental fiction and innovative prose.
Library Journal Full Review
A new genre-creating writing talent.
Stylist Full Review
These are some of the most pressing questions we face, and it's hard to think of another author who engages with them as entertainingly as Jennifer Egan.
Books Quarterly
This is a difficult book to summarise, but a delight to read, gradually distilling a medley out of its polyphonic, sometimes deliberately cacophonous voices.
The Guardian
Dizzying heights...a novel of interconnecting stories that is as emotionally accurate as it is architecturally adventurous.


The Independent
She has pinned the mass and literary market in one hit.
The Times Full Review
Thought-provoking and entertaining... distinctive and often moving... profound and enduring. John Freeman
Boston Globe
Egan constructs the novel with great skill and greater empathy.
Village Voice
Wildly inventive and lovable.
O, The Oprah Magazine
Jennifer Egan’s slamming multi-generational San Francisco saga, A Visit from the Goon Squad, pogoes from the romantic, Mohawked youth of the 70s to the present-day hell of selling out. Hot Type
Vanity Fair
A many-faceted epic... With Egan you're in the hands of a master.
Salon.com
Better Than Freedom<br /> Slate writers and editors share their favorite books of the year.
Intricately crafted, wildly imaginative. Timothy Noah, senior writer
Slate Full Review
[A] monstrous critical success.
Kirkus Reviews, 2010 Best Books
[Jennifer Egan] is one of the most talented writers today, and A Visit from the Goon Squad is her best book. Catheleen Schine
The New York Review of Books 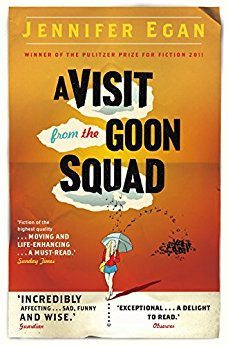