Look For Me opens with the catastrophic crash of a small passenger aircraft deep in the Colorado Rockies. Allison, the only survivor of the impact, knows that there is only one thing she can do now – run. With her enemies close behind her, she only has a small amount of time before they track her down.

On the other side of the country, Allison’s mother hears the news that her estranged daughter is missing, presumed dead. Lost in a fog of grief and desperate for answers, she begins knitting together pieces of her daughter’s past, but the portrait that takes shape is unrecognizable. What kind of life has her daughter been living? What was she doing on that plane? Is it really too late to save her, or is there a chance that she’s still alive?

Using a propulsive plot to explore the relationships women have with men, their mothers, their daughters and themselves, and charting one woman’s journey to reclaim control of her own life, Look For Me is the perfect thriller for the year of #timesup.

Katie McGowan manages the translation rights for Look For Me

Jessica Barry's debut novel opens at full throttle and never lets up. A young woman staggers away from a plane crash on the side of a mountain. Thousands of miles away, a mother struggles to understand what happened to the daughter she thought she knew. Set aside a few hours before you open this book...once you start reading, you won't want to stop.

Wow. I barely drew breath as I galloped through this gripping debut thriller. I loved it!

Jessica Barry has written a page-turner; a taut and compelling story which is difficult to put down. At the same time, through her convincing and sympathetic characters, she captures the complex relationship between mother and daughter brilliantly.

Freefall is an easily devourable and pacy page-turner - but what really got to me was the mother-daughter relationship in it. Prepare your heart to be wrenched...​

Emily Koch, author of 'If I Die Before I Wake'

Freefall is the explosive debut thriller from Jessica Barry. It's about a woman who survives a plane crash and is forced to go on the run. It's a page-turner of a book, nail-biting and compelling, and I loved the relationship between mother and daughter, both powerful female characters.

Fiona Cummins, author of The Collector

A daring tightrope walk of a novel. Exhilarating, emotional - a thriller charged with genuine depth and raw power.

A.J. Finn, author of The Woman in the Window

Written in a fast-paced style, each chapter offers new twists as motives are brought to light and secrets that Allison struggled to hide are revealed. Barry's debut novel will keep readers guessing to the end, and fans of Lisa Jackson and Lisa Scottoline will enjoy this thriller with a focus on family relationships. HIGH DEMAND BACKSTORY: Woman-focused psychological suspense is hot right now, and this debut will be everywhere.

Most debut thrillers would be happy to have one amazing story to tell. Jessica Barry's come up with two, and the way she weaves them together will have you on the edge of your seat. Freefall is an electric mix of action and emotional drama that never stops, never slows down.

Jessica Barry's Freefall is not only an enthralling, impossible-to-put-down mystery that keeps the pages flying, it is also a gorgeous, resonate tale of a mother's unconditional love for her daughter. I could not recommend this more!

A gripping page-turner. Freefall is exactly what a great thriller should be.

A brilliant, addictive page-turner with sharply drawn, duelling mother-daughter narrators who you will route for and empathize with as they struggle to survive their harrowing present, come to terms with a troubled past and fight to find their way home.

Kimberly McCreight, New York Times bestselling author of Reconstructing Amelia and Where They Found Her

Pseudonymous author Barry spins a great tale using familiar tropes but adding a surprising amount of heart to the mystery, showing the fierce bond between mother and daughter.

Author Jessica Barry's debut thriller is a page-turning, nail-biting, twisty tale for a great new voice in fiction. The story has so many twists and turns, you'll be on the edge of your seat until the climactic shocking twist to the story ... The chapters alternating between Allison and Maggie makes the story so much more enjoyable and just when you think you know what is going on, the twists kick in and bam it's a whole new ballgame. I can't wait to see what other gems author Jessica Barry will come up with in the future.

This psychological thriller is perfect for fans of Liane Moriarty and Claire Mackintosh.

Entertaining, suspenseful ... An action-packed/heart-stopping thriller. Barry delves deep to show the true character of mother and daughter, neither of whom will give up ... the strong characters do not disappoint.

Barry writes with an eye for detail, an ear for voices, and a desire to show readers something about our world and those who inhabit it ... a scintillating debut.

The corporate malfeasance and shady conspiracies of John Grisham with the frank feminism of two rounded female protagonists.

Jessica Barry's Freefall has it all: dead-girl mystery, clueless mom, and shocking twist.

Imaginative ... The tension never abates ... gripping ... the reader is hooked ... Barry's debut thriller will make you eager for whatever else she has up her sleeve.

A gut-wrenching suspense thriller in which both the mother and daughter's only thoughts are to endure, reunite, and make amends while taking the reader on a heartrending journey of trepidation and nail-biting apprehension.

People use the phrase 'rollercoaster ride' indiscriminately to describe thrillers, but it truly applies to the multiple twists and turns of Freefall.

Readers that are looking for a lightning-paced read, with a mother/daughter relationship at the core, will find a lot to like ... This one will keep readers turning the pages, and there's even a nifty twist in the final act.

With suspense, intrigue, and possible murder, Freefall is a definite thriller. It reminds us that women are strong and capable of whatever task is put before them.

Jessica Barry's debut novel is not only a thriller but the story of a mother-daughter relationship that fell apart, as so many do, after one misstep. With feelings so raw, neither one reached out until it was almost too late. But bonds formed over so many years ultimately prove unbreakable and the two women come together to save each other in the final moments.

Freefall has a literary bent to it, a structural complexity that borrows the nature of its storytelling from the classic Faulkner, teaching that the greatest conflict is the human heart at war with itself. A stunning triumph of both form and function.

Alternating chapters between the two women, Barry seizes the reader from the first page, slowly raises the temperature - and the tension - to the boiling point, and maintains interest through Allison and Maggie's physical, emotional and mental journeys. With expert pacing, gradual reveals and cinematic storytelling, Barry scores on multiple levels. She delivers a stunner that even astute thriller fans are unlikely to foresee and offers a fiery read for a frigid night.

As Freefall alternates between the two women's points of view, and between the past and the present, it combines Allison's suspenseful fight for survival with a mother's faith in her daughter, something that refuses to be extinguished even when situations turn dire. Pacing is fast, and Allison is resourceful without turning into a superhero in this riveting thriller.

Told in alternating chapters, the reader follows Allison as she struggles to survive and stay ahead of a ruthless killer, and Maggie, as she anguishes over her loss and her determination to find out the truth of her daughter's life and death. Tension-filled ... Freefall puzzles together both women's secrets and their complicated love for each other as it gains speed toward its climax. An excellent debut.

Surviving a plane crash begins an ordeal for Allison, who is on the run for her life, as her mum tries to uncover the truth of what happened. Told in short punchy chapters, alternating between both women's point of view, the full throttle action never lets up.

A dual narrative that explores the deep and complex bond between mothers and daughters. It opens with the unforgettable image of a young woman staggering away from a plane crash.

This is a perfect gift for Mother's Day, showing that when you're up against it nobody has your back like mum. It begins when Allison Carpenter survives a plane crash in Colorado's Rocky Mountains but she soon realises that's just the start of her troubles as a dangerous man is pursuing her ... Jessica Barry deploys her story and its twists with infectious brio.

Freefall flips between two stories: Allison who has survived a plane crash but is on the run and her mother, Maggie, who Allison needs to reach urgently before someone else does. I read Jessica Barry's debut in a heart-pounding rush -- I couldn't turn the pages fast enough!

The Mail on Sunday

It's easy to see why Freefall's film rights have been snapped up. Barry's cinematic writing paints vivid tableau ... Barry cleverly builds tension through an hour-by-hour countdown towards the end of the book, which culminates in a nail-biting final showdown. 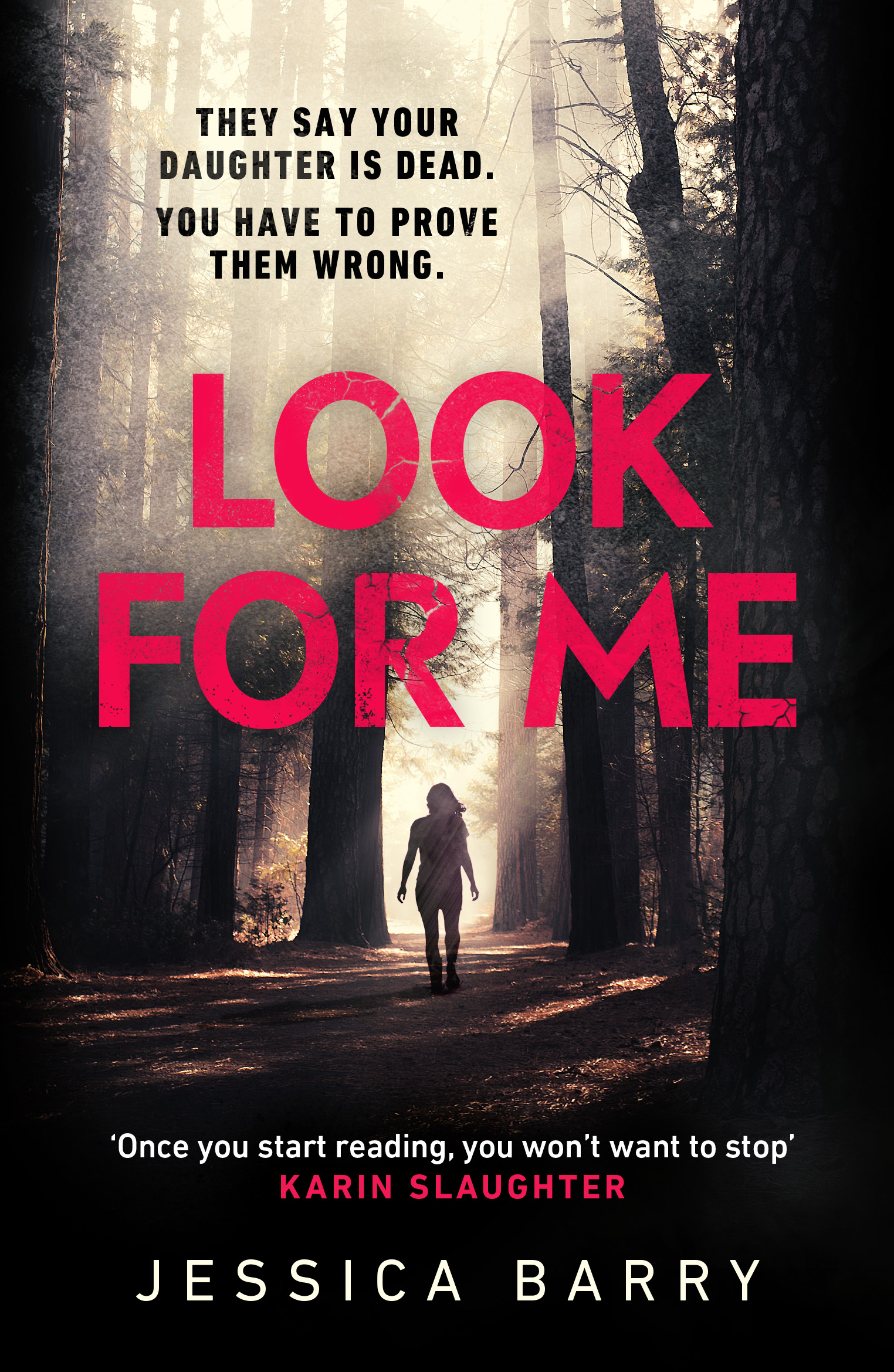