Sir Robert Rannaldini, the most successful but most detested conductor in the world, has two ambitions: first, to seduce Tabitha, the ravishing nineteen-year-old daughter of his arch-rival, Rupert Campbell-Black; second, to make the definitive film of Don Carlos, Verdi's darkest opera. To this end he enlists the help of his charismatic French godson, Tristan de Montigny, the hottest director in Europe, who is capable of coaxing magical performances out of the most wayward and wooden prima donnas.

As Rannaldini, Tristan and the entire cast insist on artistic control the recording is stormy. But this is as nothing to the ructions that occur when filming begins in Rannaldini's haunted fourteenth-century abbey. Disgruntled spooks, temperamental singers and histrionic set designers are now joined by a bolshy French film crew, determined to pull everything in sight, particularly the tempestuous Tabitha, while all the women - and several of the men - are determined to bed Tristan. To their disappointment, he is only interested in keeping the movie on track - until he finds himself increasingly attracted to Tabitha, which Rannaldini will not tolerate.Then the news leaks out that Rannaldini is writing his memoirs, revealing dreadful secrets about everyone, and from that moment his fate is sealed.

Terrifyingly creepy and wonderfully mysterious, by turns wildly funny and unashamedly romantic, Score! is Jilly Cooper's most thrilling novel to date. It is also a story about loneliness in high places, and heroism and passionate love triumphing against the odds. 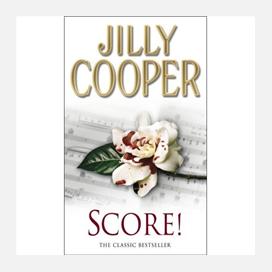