The Godfather of Kathmandu

Thai police detective Sonchai Jitpleecheep is summoned to investigate the most shocking murder of his career. Solving it could mean a promotion, but Sonchai, still reeling from a personal tragedy, is more interested in Tietsin, an exiled Tibetan lama living in Kathmandu.

There are however obstacles in Sonchai's path to enlightenment. Police Colonel Vikorn and Army General Zinna are at war again for control over Bangkok's network of illegal enterprises. And although Tietsin is eerily charismatic , he also has 40 million dollars of heroin for sale.

If Sonchai wants to be one of Tietsin's true initiates, he has to pull off a deal that will bring Vikorn and Zinna to the same side of the table. With his life in increasing danger, and his soul in thrall to a woman with sorceress-like powers, Sonchai is put to the extreme test in John Burdett's most inventive, darkly comic and wickedly entertaining novel yet.

Sophie Baker manages the translation rights for The Godfather of Kathmandu 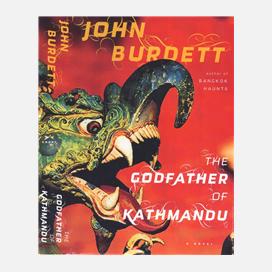