US & Canada → Knopf (Ed. Sonny Mehta)
Nobody knows Bangkok like Royal Thai Police Detective Sonchai Jitpleecheep, and there is no one quite like Sonchai: a police officer who has kept his Buddhist soul intact — more or less — despite the fact that his job shoves him face-to-face with some of the most vile and outrageous crimes and criminals in Bangkok. But for his newest assignment, everything he knows about his city — and himself — will be a mere starting point.

He’s put in charge of the highest-profile criminal case in Thailand, an attempt to bring an end to trafficking in human organs. He sets in motion a massive sting operation and stays at its center, traveling to Phuket, Hong Kong, Dubai, Shanghai, and Monte Carlo. He draws in a host of unwitting players that includes an aging rock star wearing out his second liver and the mysterious, diabolical, albeit gorgeous co-queenpins of the international body-parts trade: the Chinese twins known as the Vultures. And yet, it’s closer to home that Sonchai will discover things getting really dicey: rumors will reach him suggesting that his ex-prostitute wife, Chanya, is having an affair. Will Sonchai be enlightened enough — forget Buddha, think jealous husband — to cope with his very own compromised and compromising world?

All will be revealed here, in John Burdett’s most mordantly funny, propulsive, fiendishly entertaining novel yet.
Rights

Patrick Besson
Full Review
Vulture Peak upholds the high standards set by its predecessors. Readers who know the first four novels will be delighted to have a fifth, and others coming to Burdett’s Bangkok for the first time will quickly find themselves in a place that may seem mysteriously alien but positively teems with humanity. Jonathan Yardley
The Washington Post Full Review
This series is not to be missed by anyone unafraid of crime fiction's edgiest neighborhoods. Bill Ott
Booklist Full Review
Vulture Peak is a modern morality tale with all the requisite bells and whistles and much more: a salutary warning for the Internet age. A. J. Kirby
New York Journal of Books Full Review
Bagkok detective Sonchai Jitpleecheep, whose Buddhist soul is constantly under assault from the distinctly unenlightening spectacle of human depravity surrounding him, may be one of the most engaging cops in current fiction. The international trade in human organs is subject of his latest case.
Barnes & Noble’s 10 Fiction Picks 2012
Though not for the faint fo heart, the ‘surreal, exotic, rich’- and quite crazy- world Sonchai inhabits is a classic head trip.
New York Times Book Review Full Review
What keeps the book buoyant is the observations of the hero, a Thai police detective obsessed with karma. When he calls the twins ‘inhuman,’ he means it literally: they are ‘ a variety of pawb or ogre that lives in human bodies.’ He seems happiest in the pauses between bits of sleuthing, whiling away the hours of a stakeout in an opium dream or chatting with a Buddhist monk who fears that farangs (foreigners) have poor prospects for reincarnation: ‘I see sheep and dogs of the future in designer T-shirts.’
The New Yorker Full Review 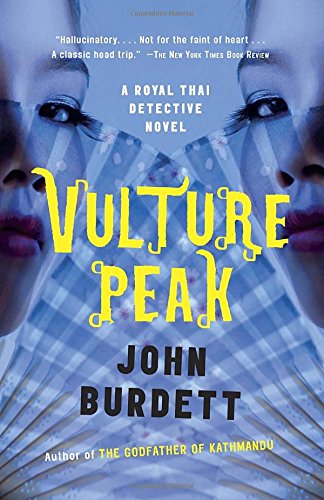