Following its debut on BBC4 in March 2011, Twenty Twelve returned for a second series on BBC2.

The Olympics Deliverance Committee, headed by Ian Fletcher (Hugh Bonneville), have a new set of challenges to face as the games draw ever closer. From a stand-off between the French and the Algerians over the 'shared belief centre' to the installation of new hand dryers in the bathrooms, the run up to the Olympics is not going to go smoothly for the team.

pick of the bunch - for one final week - remains John Morton's iron fist inside a velvet glove... Tremendous performances and pin-point satire

comic heaven... If the real Games are half as much fun as this, the London Olympics will be a triumph.

David Chater
The Times Full Review
It’s a great final episode, a zinger at the end of a too-brief series. Can we have an Olympic Games special in the summer, please? Alison Graham
Radio Times
well plotted and boasts some splendid dialogue Andrew Billen
The Times Full Review
far and away the funniest series on television at the moment David Chater
The Times Full Review
it's John Morton's script that deserves the gold Oliver Franklin
GQ
one of the funniest things on television... last night's episode seemed close to perfect Tom Sutcliffe
The Independent
wonderful. Literally LOL Sam Wollaston
The Guardian
Another perfectly judged script with superb performances, most notably Olivia Colman's PA. Solid gold stuff Julia Raeside
The Guardian

Is it just us or is 'Twenty Twelve' getting funnier as the Olympics draw nearer?... the script is pitched perfectly between fondness and scepticism **** 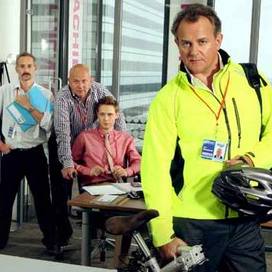