The Girl You Left Behind

UK & Comm → Penguin (Ed. Louise Moore)
US & Canada → Penguin
What happened to the girl you left behind?

In 1916 French artist Edouard Lefevre leaves his wife Sophie to go to fight at the Front. When her town falls into German hands, his portrait of Sophie stirs the heart of the local Kommandant and causes her to risk everything - her family, reputation and life - in the hope of seeing her true love one last time.

Nearly a century later and Sophie's portrait is given to Liv by her young husband shortly before his sudden death. Its beauty speaks of their short life together, but when the painting's dark and passion-torn history is revealed, Liv discovers that the first spark of love she has felt since she lost him is threatened...

In The Girl You Left Behind two young women, separated by a century, are united in their determination to fight for the thing they love most - whatever the cost.
Rights

The Girl You Left Behind is a true work of art.
Fabulous Magazine
This is a hugely enjoyable, wide-ranging and believable novel, carefully researched, which takes in all the guilt, betrayal and grand passions occasioned by the First World War and two enviable romances between two impossibly romantic couples, one in the present, one in the past. Beautifully done.
Red Magazine
Can love ever trump greed? At its heart, such questions,
thrumming in the background, add depth to what is an uncommonly good love story. Donna Chavez
Booklist Full Review
Liv and Sophie are so real in their faults, passion, and bravery that the reader is swept along right to the end. This one is hard to put down! Jennifer Beach
Library Journal Full Review
Lovely and wry, Moyes’s newest is captivating and bittersweet. Rebecca Lang
Publishers Weekly Full Review

The Girl You Left Behind is, well, impossible to leave behind. In this moving paean to daring, determination and perspicacity, Moyes keeps the reader guessing down to the last hankie. 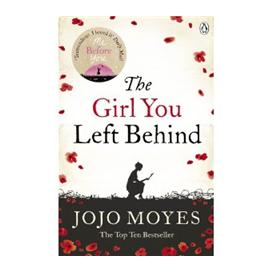