The Girl Who Just Appeared

World → Macmillan (Ed. Waynes Brookes)
From the award-winning author of All She Wants and the writer of Coronation Street and Gimme, Gimme, Gimme, comes this comedy with a huge, beating heart.

London 2014. Holly Smith has never fitted in. Adopted when just a few months old, she's always felt she was someone with no history, the girl who just appeared. All she has is the address of where she was born - 32B Gambier Terrace, Liverpool. By a bizarre twist of fate Holly discovers that the flat is available to rent. She travels north and moves in. When she finds a biscuit tin full of yellowing papers under the floorboards, she wonders if this might hold the secret to her past.

Liverpool 1981. Fifteen-year-old Darren negotiates life with his errant mother and the younger brother he is bringing up. When the Toxteth Riots explode around him Darren finds himself with a moral dilemma that will have consequences for the rest of his life.

Flitting between the present and the past, we discover how Darren and Holly's lives become intertwined. Will Holly uncover the secrets of her past? Or will she always feel like the girl who just appeared?
Rights

Media
Reviews
His third novel is very funny, as one might expect from such a brilliant writer of comedy - bit it shows that he can also handle sadness and tragedy.  Sparkling and moving.
The Times 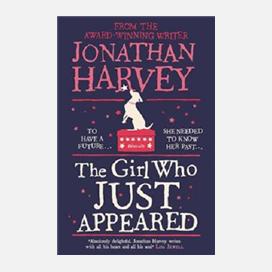