Originally commissioned and developed by the BBC, Andy Riley and Kevin Cecil's animated sitcom came to life on ABC's cable comedy outlet, ABC Family, which produced a thirteen part run of the cat-com.

Executive produced by Riley and Cecil and featuring episodes by Quirke and French and Gideon Defoe, the show was animated by the production company responsible for The Simpsons and King of the Hill while cult comedians Emo Phillips and Sinbad gave voice to the subversive moggies. 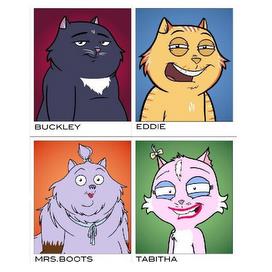