Eleven-year-old Billie lives at a “temporary home for children” called Children in Reindeer Woods, which she discovers one afternoon, to her surprise, is in the middle of a war zone. When a small group of paratroopers kill everyone who lives there with her, and then turn on each other, Billie is forced to learn to live with the violent, innocent, and troubled soldier Rafael. As their relationship evolves into an alarming pas de deux, Raphael decides to abandon the warring life and become a farmer, but soon finds that the peace he seeks can only be obtained through theft and murder. A lyrical and continually surprising take on the absurdity of war and the mysteries of childhood, Children in Reindeer Woods is a moving modern fable.

Children in Reindeer Woods, the first of the Icelandic writer Kristin Omarsdottir’s novels to be translated into English, is an assured introduction to her work ... Omarsdottir’s skills as a poet and playwright are particularly evident ... a daringly droll, wholly perturbing book.

The readers of Kristín Ómarsdóttir are used to strange things being reported in a very casual way. The text is often hilarious—but the undercurrent is heavy, for the novel raises questions about the reality of war, where killing is the norm; and questions about what makes people what they are, and what power they have over their own lives.

A literary allegory filled with truths and absurdities about the human condition … this is the first of Icelandic author Ómarsdóttir’s novels to appear in English, and it shouldn’t be the last. Somewhere in the reader’s mind, Catch-22 echoes faintly. 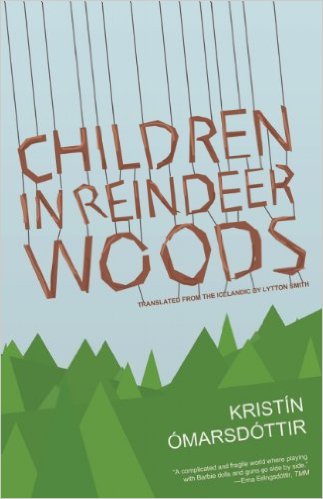