US → HarperCollins
Nominated for an Edgar Award

She can't believe she has to move again after her mom's break-up with the latest boyfriend. Now they're broke and they'll have to spend the winter in Uncle Wes's creepy summerhouse in Cape May, New Jersey.

And the place is crawling with ghosts.

From the spiteful teenager who mistakes Lily for her high school nemesis to the restless spirit of her eccentric Uncle Max, Lily is haunted by a host of unhappy phantoms. But why are they here? And what do they want?

With the help of some mysterious clues, Lily and her new friend, local boy Vaz, uncover a sinister plot. If they don't foil the villainous plan in time, they may end up doing some eternal haunting of their own.
Rights

French
World
Editions Albin Michel
Media
Reviews
A cast of eccentric characters plays out this intriguing story, which opens with an enticing description of Cape May, NJ, and the hint that ghosts might be hovering about….The story shifts back and forth between her reality and a parallel world inhabited by ghosts, giving the book multiple dimensions and keeping readers guessing…Readers will be hooked right up to the surprising ending.
School Library Journal
Her often funny story…is capped by…a twist ending that is totally earned. This should be a movie.
Kirkus Reviews
A fast-paced, comic tale.
Pittsburgh Post-Gazette
A spirited novel. Readers will fly through the pages.
Chicago Sun-Times 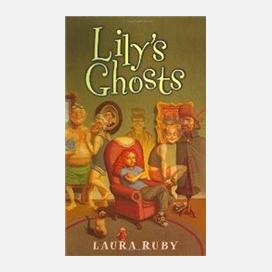