Kate Fours, her husband Roan, and their two teenage children are living temporarily in a flat in one of the finest streets in Hampstead, north London. When her daughter comes home terrified after being followed down the street by a strange man, all Kate’s instincts tell her that she knows exactly who it was. But is she correct? Then someone else she knows is violently assaulted just around the corner from her flat, and Kate begins to think she must act on her suspicions before it's too late.

Owen Rudd lives with his aunt in Hampstead. He is thirty-three and has never had a girlfriend. Having been suspended from his job as a teacher at a technical college, he finds himself questioning his position in life. Looking for answers, he stumbles upon an online world full of lonely men, just like him. And then he meets William who has never had a girlfriend either. But William has a solution, a solution that is as tempting as Owen knows it is horribly wrong.

Saffyre Maddox is seventeen and lives in a 10th floor flat with her stepfather and her stepbrother. She is a troubled child, currently being treated by a child psychologist called Roan Fours. She’s been a patient of Roan’s for nearly two years, and has become close to him in that time. Dependent on him, almost. And she knows things about him. Things that he wouldn’t want anyone else to know. Especially his wife.

The lives of three very different people are about to collide in a shocking and unimaginable way.

‘Another masterpiece from a novelist whose grip on human nature in its flawed entirety never slips. The Invisible Girl is gripping, disturbing and acutely observant; Jewell is an extremely special writer."

‘I’ve really struggled with reading during Lockdown but this weekend I finished Lisa Jewell’s gripping Invisible Girl and it was such a joy not to be able to put a book down. Her best yet.’

"I didn’t mean to but I couldn’t help it - I read this in one sitting last night. It’s a masterclass in how to write with pace and tension, and the characters are brilliantly realised. I simply didn’t want to put it down! Out in August and it’s very good indeed"

‘An up all night gripping story with characters as real as you and me. Lisa Jewell is the kind of writer you read twice - once as a breathless reader to see how the story unfolds, and then again to see how she makes it look so easy.’

‘Another masterpiece from a novelist whose grip on human nature in its flawed entirety never slips. The Invisible Girl is gripping, disturbing and acutely observant; Jewell is an extremely special writer."

‘I am always reminded of Ruth Rendell at her very best when I read Lisa Jewell. Not only is her plotting masterful, Lisa has the rare ability to make you care – passionately – about all her characters, whether they are important or minor, instantly appealing or apparently monstrous. Invisible Girl is quite brilliant in every way.'

'Dark, gripping, emotionally intense. My heart hurt from being squeezed so tight.’

‘A breathtakingly brilliant novel by an author at the absolute top of her game'.

Compelling and surprisingly moving - Lisa Jewell never lets you down.’

‘INVISIBLE GIRL. I loved it. Every damn word’

‘An outstanding tale of intrigue, family secrets and exceptional storytelling. Lisa is the queen of intrinsic plotting with relatable characters, and suspense by the bucket load. I adored it.’ 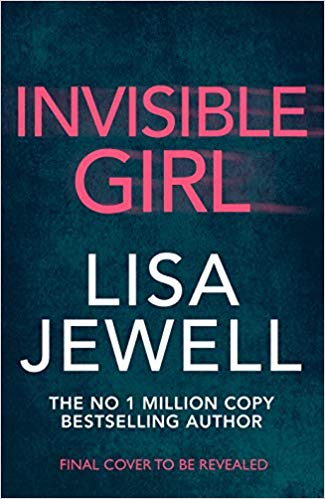