On a bright morning in the London suburbs, a family moves into the house they’ve just bought on Trinity Avenue. Nothing strange about that. Except it's your house. And you didn’t sell it.

FOR BETTER, FOR WORSE.

When Fi Lawson arrives home to find strangers moving into her house, she is plunged into terror and confusion. She and her husband Bram have owned their home on Trinity Avenue for years and have no intention of selling. How can this other family possibly think the house is theirs? And why has Bram disappeared when she needs him most?

FOR RICHER, FOR POORER.

Bram has made a catastrophic mistake and now he is paying. Unable to see his wife, his children or his home, he has nothing left but to settle scores. As the nightmare takes grip, both Bram and Fi try to make sense of the events that led to a devastating crime. What has he hidden from her – and what has she hidden from him? And will either survive the chilling truth – that there are far worse things you can lose than your house?

TILL DEATH US DO PART.

OUR HOUSE won the British Book Award for Crime & Thriller Book of the Year in May 2019.

Katie McGowan manages the translation rights for Our House

If you want something to keep you awake at night, I recommend Louise Candlish's novel Our House...

Terrifying yet utterly plausible, this book makes you doubt everything you thought you know

Gillian McAllister, author of Anything You Do Say

Some readers might catch an uncomfortable glimpse of themselves in the terrifically twisty Our House by Louise Candlish. It hooks from the first page... She brilliantly skewers the competitive camaraderie of middle-class gin-o'clock mothers in a feverish read that delivers surprises to the last.

If 2018 brings a better book than Our House I will eat my hat. Addictive, twisty and oh so terrifyingly possible

I raced through it this weekend. Such a smart idea. Twisty, warped, credible. Brilliantly plotted and compelling. Deserves to be such a hit

Sarah Vaughan, author of Anatomy of a Scandal

Heart-stopping, toe-curling, breath-taking! Half can’t bear to read/half can’t bear to put it down. It’s marvellous - so tautly plotted and don’t see the twists coming! Will be a smash hit!

Our House is one of the best books I have ever read ... FACT

Isabelle Broom, author of My Map of You

Gripping and heartbreaking with an undercurrent of unease running through it

Louise Jensen, author of The Gift

Finished in two days. Absolutely brilliant. It has bestseller written all over it

Kate Furnivall, author of The Betrayal

A great read – lots of surprises and an excellent ending

Catherine Isaac, author of You Me Everything

Oh Louise Candlish, you are a genius! Our House is just brilliant. Scarily believable with the BEST ending I have read in a long time. I devoured it!

A high-stakes domestic thriller that is utterly absorbing. Twists and turns abound, and Our House will have you locking your doors and checking your windows. Candlish delivers a frightening portrait of one woman’s worst nightmare. Trust no one!

What a book! Fast, edge-of-your-seat stuff. Each time I set the book down I had to remind myself to breathe

Candlish is an expert on the psychological flaws of these types of couples and she doesn’t shrink from posing uncomfortable questions about modern marriage. This very original storyline is a winner.

Woah, that ending! What a completely brilliant and terrifying book!

The pace is relentless, the way the story snowballs is so excruciating but so compelling, you almost find yourself reading it through your fingers. Loved, loved, loved it.

I loved the wonderful hook of OUR HOUSE, which plays with our modern obsession with property - and the vulnerability that exposes. Louise Candlish is a great writer; she inhaled me into her nightmarish world where everything we think we know is ripped from under our feet.

What a sensational book this is, with a plot that unrolls like clockwork, and simmering tension that never lets up. Betrayal, double-crossing and the most delicious sting in the tail... I couldn't put it down.

Husband and wife pass the narrative baton between them in this masterfully plotted, compulsive page-turner.

British author Candlish makes her U.S. debut with an artfully plotted, affecting page-turner [...] Movingly chronicling the decline of a marriage that once looked as solid as the couple’s stately red-brick residence, Candlish manages to stash a couple of trump cards, setting up a truly killer climax. American fans of domestic suspense will want to see more from this talented author. 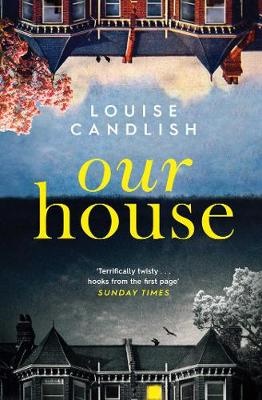