It does exactly what it says on the tin but here's a brief word from its author, Mammy Walsh herself:

'There's this woman I know from bridge, Mona Hopkins, a lovely woman she is, even if I must admit I'm not that keen on her myself, and she said a great thing the other day. I was expecting her to say "Two no trumps," but instead she comes out with a saying about her children. She says, "Boys wreck your house and girls wreck your head." Isn't that a marvellous bit of wisdom - "Boys wreck your house and girls wreck your head!" And God knows it's the truest thing I've heard in a long time. I should know. I have five girls. Five daughters. And let me tell you, my head is wrecked from them. Although, now that I think of it, so is my house . . .'

It's the perfect re-introduction to the Walsh family and Marian's new novel, The Mystery of Mercy Close.
Rights 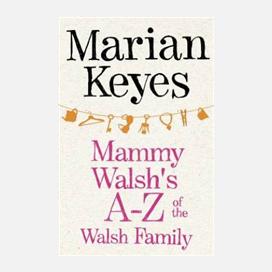