To Be A Machine

Adventures Among Cyborgs, Utopian, Hackers, and the Futurists Solving the Modest Problem of Death

Winner of the Wellcome Book Prize 2018

Shortlisted for the Baillie Gifford Prize

Meet the visionaries, billionaires, professors, and programmers who are using groundbreaking technology to push the limits of the human body—our senses, intelligence, and our lifespans

Once relegated to the fringes of society, transhumanism (the use of technology to enhance human intellectual and physical capability) is now poised to enter our cultural mainstream. It has found adherents in Silicon Valley billionaires Ray Kurzweil and Peter Diamandis. Google has entered the picture, establishing a bio-tech subsidiary aimed at solving the problem of aging.

In To Be a Machine, journalist Mark O'Connell takes a headlong dive into this burgeoning movement. He travels to the laboratories, conferences, and basements of today's foremost transhumanists, where he's presented with the staggering possibilities and moral quandaries of new technologies like mind uploading, artificial superintelligence, cryonics, and device implants.
A contributor to Slate, The New Yorker, and The New York Times Magazine, O'Connell serves as a sharp and lively guide to the outer limits of technology in the twenty first century. In investigating what it means to be a machine, he offers a surprising, singular meditation on what it means to be human.
Rights

Claire Nozieres manages the translation rights for To Be A Machine

Provocative, funny, and not a little gonzo, it’s a great one to recommend to devotees of Jon Ronson

A stimulating overview of modern scientific realities once thought to be the exclusive purview of science fiction.

Olivia Laing
Full Review
Would you become an immortal machine?


O'Connell decides to dive into the transhumanist culture in the best possible way: by traveling the world in search of the key figures in the movement to see what makes them believes so completely that science can, in fact, beat death. The result is a fast-paced travel-log-cum-existential inquiry into the science and the religious significance of this age-old human desire to live forever: To become, in effect, a god.

O'Connell is a highly sceptical observer, sometimes horrified and often amused... To Be A Machine is an attempt, nonetheless, to understand the transhumanist movement on its own terms; it's a conversational, approachable book, resembling a set of magazine articles skilfully bonded together... It's O'Connell's lack of stridency, as well as his often splendid writing, that makes him such a companionable guide

O'Connell is a writer who is not afraid to delve deep into the history of ideas to very subtly convince the reader of his own arguments...Part gonzo journalism, part philosophy of the mind, part critique of late western capitalism, To Be A Machine is an intriguing investigation into what it means to be a human being.

Readers will appreciate O’Connell’s sense of humor and his fast-paced writing, and will at times feel like they’re having a dialogue with the author as he ponders the ethics, consequences, and dilemmas of these transhumanist activities embedded in society today. Those who are interested in artificial intelligence, bioengineering, technology, and human development will find this book to be deeply engrossing and informative on the topic of transhumanism and what it means to be a human today and in the future.

By exposing the ludicrous yet terrifyingly serious ideologies behind transhumanism, To Be A Machine is an important book, as well as a seriously funny one

A brilliant book about humanity's quest for technological immortality [which] gets you rooting for the grim reaper... if the subject is inherently complex... [O'Connell] makes light work explaining it. He's also funny... Beneath it all, and what makes TO BE A MACHINE such fascinating reading, is the interplay between urges that are at once incredibly forward-looking and undeniably primal

O'Connell...dissects the practices and beliefs of transhumanism with extraordinary exuberance and wit

This is a gentle, humorous and lovingly written book that is the best on its subject since Ed Regis's forgotten 1990 masterpiece Great Mambo Chicken and the Transhuman Condition.

O'Connell is an efficient host and curator, packing so much into a slim book that you might suspect some supernatural technology to be at work. This makes To Be A Machine essential reading on a subject you didn't know you needed to be worried about

Mark O’Connell [is] a writer with quite a way with words... he reports with a fluency and humour any novelist might envy... O’Connell, while meeting people as nutty as any encountered by Jon Ronson, never just plays it for laughs. Instead of ridiculing transhumanism as a parody of religion, he allows that it comes from the same perplexities, hopes and fears... A gem of a book.

One of the joys of this book is O’Connell’s near-faultless handling of tone, which ranges from the mock-pedantic (‘the media – a category from which I did not presume to exclude myself’) to Amis-esque saltiness (a robot moves ‘in the manner of a prodigiously shitfaced man intent on demonstrating that he had only had a couple of sherries with dinner’) via DeLillo-esque pastiche (‘There were malfunctions of equipment; things did not proceed frictionlessly’)... O'Connell excels at the tricky task of painting his subjects vividly while treating them fairly.


O'Connell presents the reader with a gallery of diverting characters, including an Oxford-educated 'extropian' philosopher who goes by the name of Max More, who aims to achieve 'more life, more intelligence, more freedom', and Zoltan Istvan, the transhumanist candidate for the US presidancy in 2016, who conducted his campaign from an 'immortality bus' decked out as a coffin... O'Connell's impressions of the lost souls who have drifted into transhumanism are vivid and memorable.

To Be a Machine is properly amazing. It is stimulating, profound and indecently witty.

O’Connell voyages engagingly into cryonics, brain uploading, artificial superintelligence, four-digit lifespans, as he [...] reflects on the inherently finite nature of human existence. Provocative, funny and not a little gonzo, it’s a great one to recommend to devotees of Jon Ronson.

This Homer’s Odyssey for the digital age spirits the reader through some of the most lurid reaches of technomania... A diverting anthropological study.

Makes for as many laughs as genuine pauses for thought

If you’re a fan of Jon Ronson and Don DeLillo, look no further: in To Be a Machine, Irish author Mark O’Connell traces his journey into a surreal cultish society of men who believe we will one day gain immortality and merge our minds with machines… A cerebral, witty joy

A beautiful picture of a dazzling, dangerous thing… To Be a Machine is more poetic than polemic, and all the more powerful for it

A really good book – very funny and well written... does a great job of exploring the motivations [of transhumanists]... Fascinating

A captivating work of investigative journalism, Louis Theroux-like in its delivery and very thought provoking

How it Works Magazine

To Be a Machine is a hilarious and moving book. It is super-detailed and cosmic and minute and high-stakes and funny and sad, all at the same time.

This engaging gallop through the history and current state of play is a good preparation for making an informed choice as well as an entertaining, if at times unnerving, read

A bravura inspection of the alarming world of the bio-hackers, cryogenicists and scientists who think we can use technology to escape our bodies and become immortal

Science and Nature Summer Books round up, Sunday Times

Brilliant… A terrifying, fascinating and often funny insight into a brave new

A fun read, it asks a lot of hard questions, goes out and talks to those on the real bleeding edge of these ideas and technologies, but in a readable and enjoyable manner… This is an intelligent and thoughtful look at the wild and edgy world of transhumanism, futurism, AI, the Singularity and many more interesting concepts

This terrific book is as fascinating on how we live now as it is about our possible futures.

An enlightening tour of transhumanism... An unsettling but informative and sometimes-optimistic view of mostly legitimate efforts at life extension.

Mortality, consciousness, and the spark and meat of life…O’Connell, an Irish journalist with a literary bent, does have fun….As O’Connell makes clear, this is difficult material to argue about—less a debate over ideas than a clash of worldviews.

This investigation of transhumanism... is riveting, fascinating, comic and appalling. ... Read this disturbing, yet highly enjoyable book. It will make you wonder what sort of world your children and grandchildren will inhabit. 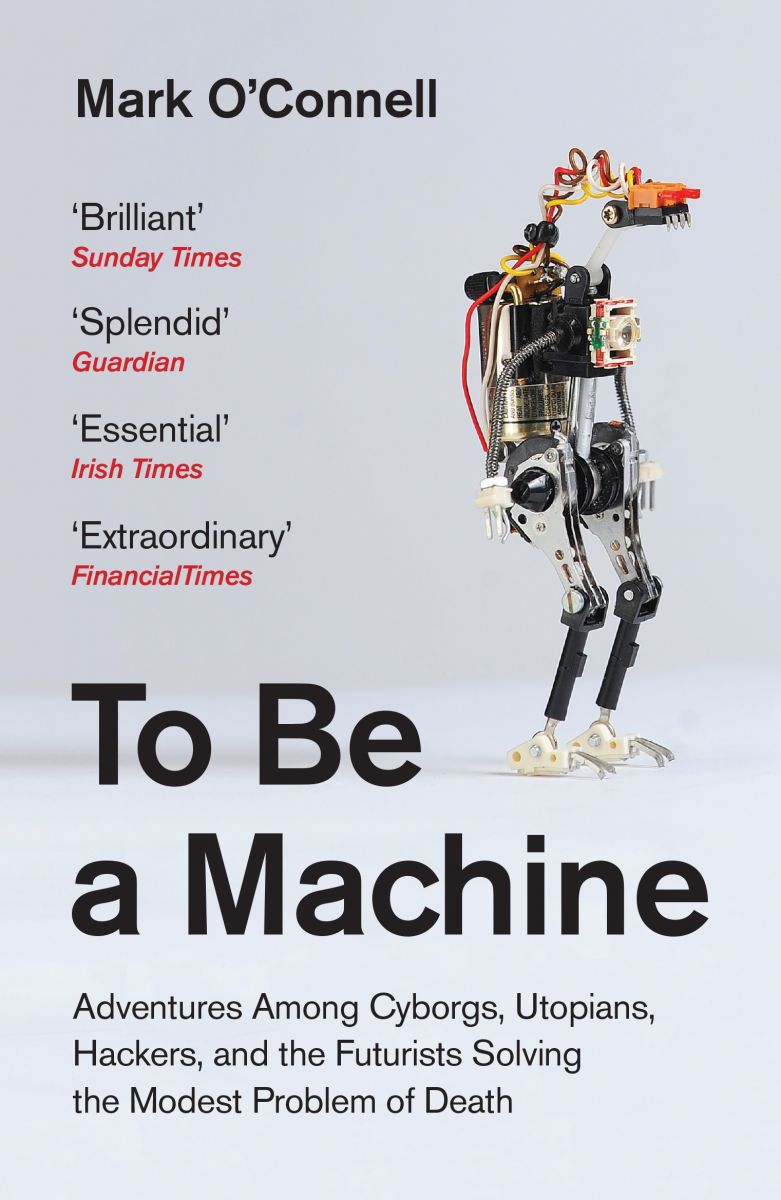