The play follows three lives which collide over a single unforgettable night of temptation, damnation, rebirth and redemption.

The play had great success at The Abbey Theatre, a hit international tour and a Scotsman Fringe First Award at Edinburgh.  A new tour started again in 2011 starring Catherine Walker, Declan Conlon and Olwen Fouere.  The tour started in the US, then came to the Young Vic in London, and finished off at the Sydney Opera House.

Media
Reviews
at all times the author’s mastery and skill is on display Brian Singleton
Irish Theatre Magazine
O'Rowe is a masterful writer, conjuring up beautifully vivid images with his rich text...(he) is one of the finest contemporary Irish writers around Simon Sladen
The British Theatre Guide
startlingly brilliant
Time Out
Directed by the writer, Terminus is a feat of storytelling Brian Logan
The Guardian
O'Rowe is expanding his language and dramatic form as far as they can go. Helen Meany
The Guardian
Terminus will become a modern classic
Fiona Mountford
Evening Standard
The language - sparkling, funny and heightened - is poetic and fantastical, Molière meets magic realism.
Veronica Lee
The Arts Desk
It’s impressively sustained and ingeniously constructed Sarah Hemming
Financial Times 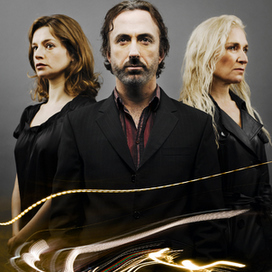