Mark Sanderson does for the 30s what Jake Arnott did for 60s London -- vividly revealing its hidden underworld in an unforgettably gripping crime novel.

"Friday, 18 December, 1936. I went to my funeral this morning!" So begins the diary of Johnny Steadman, an ambitious reporter on London's Fleet Street. When he gets a tip-off about a Snow Hill policeman's death he thinks he's found the scoop that will make his career. Trouble is, no-one at the station seems to know anything about it - or they're not telling. Johnny's one lead takes him to the meat market at Smithfield where he encounters violent death close up and personal. Undaunted by this chilling message, his investigation drags him deep into a web of corruption that reaches further than he could ever have imagined.

Johnny must risk everything to save his closest friend and expose the ruthless killer at the heart of this dark story. But to bring them to justice he must first go undercover. Six feet undercover. After all, a dead man cannot be tried for murder.

Media
Reviews
Financial Times
Elegant, unpretentious writing, a strong build-up of suspense and the portrayal of a central relationship between Johnny, the hot-shot reporter, and his old school buddy Matt Turner, a policeman from the City’s Snow Hill police station, which is both emotionally believable and intriguing. Snow Hill has undeniable page-turning appeal.
Financial Times Full Review
The Guardian review
Sanderson has crafted a terrific plot with some wonderful set pieces, and pulls no punches when it comes to graphic descriptions of deviant acts. Snow Hill is clearly well researched, and the author has a great feel for period detail. Laura Wilson
The Guardian Full Review 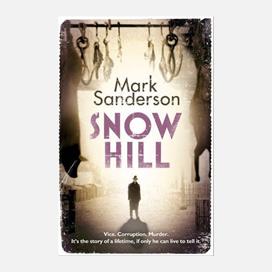