This extraordinary, gripping debut is a rags-to-riches-to-revolution tale about an orphan girl's coming of age in Iran.

It is the early 1950s in a restless Iran, a country powerful with oil wealth but unsettled by class and religious divides and by a larger world hungry for its resources. One night, a humble driver in the Iranian army is walking home through a neighbourhood in Tehran when he hears a small, pitiful cry. Curious, he searches for the source, and to his horror comes upon a newborn baby girl abandoned by the side of the road and encircled by ravenous dogs. He snatches up the child, and forever alters his own destiny and that of the little girl, whom he names Aria.

Nazanine Hozar's stunning debut takes us inside the Iranian revolution--but seen like never before, through the eyes of an orphan girl. Through Aria, we meet three very different women who are fated to mother the lost child: reckless and self-absorbed Zahra, wife of the kind-hearted soldier; wealthy and compassionate Fereshteh, who welcomes Aria into her home, adopting her as an heir; and finally, the mysterious, impoverished Mehri, whose connection to Aria is both a blessing and a burden. The novel's heart-pounding conclusion takes us through the brutal revolution that installs the Ayatollah Khomeini as Iran's supreme leader, even as Aria falls in love and becomes a young mother herself.

Nazanine Hozar’s immaculate first novel, Aria , follows a group of Iranians in the lead-up to the 1979 revolution and marks the arrival of a major new voice

Making an impressive fiction debut, Hozar creates a vibrant, unsettling portrait of her native Iran from the 1950s to 1981 . . . An engrossing tale that reveals a nation's fraught history.

Affecting . . . leaves you . . . simultaneously heartbroken and full of hope

An impressive debut, not easily forgotten.

Hozar’s novel is epic, intimate and excellent on the complex forces behind Iran’s pivotal political moment.

‘A beautiful book set against the pains and passions of the Iranian Revolution. It is so compellingly realised, and its characters and events so intimately portrayed, that one feels, while reading it, Iranian, which is to say it is a book about a particular time and place yet also, and perhaps more importantly, about the common hopes and intimate longings of lives so forcibly invaded by national events.’

Aria is a feminist odyssey, about a girl in a time of intolerance as the revolution in Iran is breaking out ... a poised and dramatic historical novel with contemporary relevance.

A sweeping saga about the Iranian revolution as it explodes - told from the ground level and center of the chaos. A Doctor Zhivago of Iran.

The skilfully told story of a young woman struggling to find her place in intolerant, revolutionary Iran.

Nazanine Hozar’s stunning debut takes us inside the Iranian revolution–but seen like never before, through the eyes of an orphan girl. 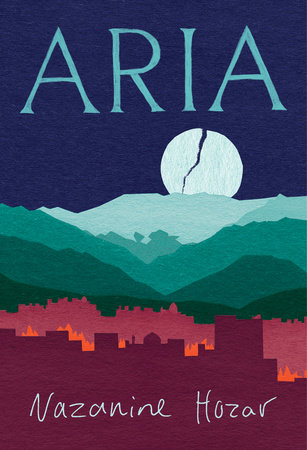