Accidents happen to other people. But on On May 10th 2002 Nina Bawden discovered what it feels like to be one of the 'other people'.

It was to be a lovely outing to Cambridge for a friend's birthday party. Nina Bawden and her husband Austen Kark boarded the 12:45 from Kings Cross and settled down with their books and papers. A few minutes later the train derailed. Seven people were killed and 76 badly hurt. Nina Bawden was gravely injured and Austen was killed instantly.

In this powerful and poignant letter to her husband, Nina Bawden uses her considerable writing skills to try and make sense of it all. She explains how she- now in her late 70s - found herself the outspoken spokesperson for the survivors of the crash, interviewed here and abroad and even one of the characters portrayed in David Hare's The Permanent Way. Although liability has finally been admitted, as of October 2004 there has been no resolution to this tragedy, nor a public enquiry into how it happened. 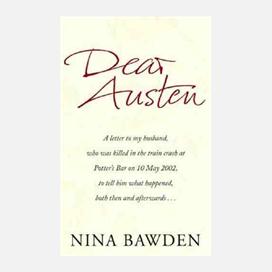