View PDF
BAFTA Award for Best Comedy 2011
tv
Role Various
Producer Phil Bowker Director Tristram Shapeero Starring
Production Company Tiger Apect Productions
Broadcaster BBC1
Paul and Harry Enfield reunited as a comedy duo after eight years apart for the sketch show Harry & Paul, bringing a whole new set of characters to life. Peskovitch the ever diving footballer, the Posh Scaffolders, the Fat Kids Jamie and Oliver were introduced to our screens along with debuts for Laurel and Hardy in Brokeback Mountain, The Greek Mr Bean, The Computer Billionaires and Bono and The Edge.

Harry & Paul (formerly Ruddy Hell! It's Harry and Paul) was first broadcast on BBC1 in 2007 with the second series going on to win a BAFTA in 2009. The new series launched in September 2010 and went on to win the production's second BAFTA award in May 2011.
Media
Reviews
It is replete with the trademark qualities Enfield and Whitehouse have patented over the years: deftly observed, beautifully performed characters, who remain just the right side of outright caricature. James Rampton
Daily Telegraph 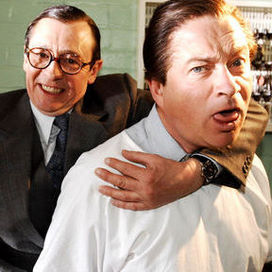